Zac Harmon to Share a “Mighty High” at the Green Parrot 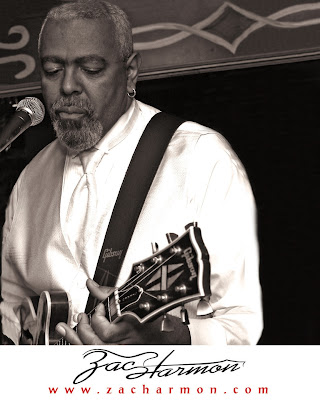 The Green Parrot will host one of blues music’s fastest rising stars
when Zac Harmon takes the stage for a two-night stand on Wednesday
December 27 and Thursday December 28 beginning at 10 P.M.including a
5:30 P.M. “soundcheck” on Thursday.
Zac Harmon is the love child of Jackson Mississippi’s storied Farish
Street folk tradition and Los Angeles’ legacy of impeccable
showmanship. Touring out of Mississippi with Sam Myers by the age of
14, he grew up working the same fertile music territory that
cultivated the likes of Sonny Boy Williamson II, Elmore James and
Little Milton. Out of high school, Zac traded the opportunities that
lay on the road for the opportunity to keep a family promise and
finish his education. He completed his MBA program in California
before returning to the business of music, this time as a producer.
In the studio, Zac worked with a who’s who of clients on projects that
ranged from scoring “White Men Can’t Jump” to producing Black Uruhu’s
Grammy Award winning “Mystical Truth”.

By 2003, Zac had started stepping into the spotlight again, stretching
out his chops with everyone who would play and getting the feel again
for center stage in the neighborhood blues rooms and juke joints of
southern California. He certainly showed no ill effect from his years
spent working behind the scenes. In fact, when Zac Harmon took up the
microphone and guitar he seemed to tap into some ethereal vein that
evoked all the energy and passion of that 19 year old youth who traded
his telecaster for a textbook, even while conveying a musical
temperance and vocabulary that only a storied career could instill.

In 2004, Zac reinvented himself, putting together an ensemble of six
talented and seasoned left-coast professionals calling themselves the
Mid-South Blues Revue, and releasing The Blues According to Zachariah
on his own Bluestone Records. For their efforts they received one of
the blues’ most coveted awards in their first year of touring, winning
the very competitive International Blues Challenge.

In 2005, as they began to tour into new territories, a broader
audience was taking notice. Zac’s original and uplifting material
seemed to have a wide appeal and tracks appeared on radio play lists
across the country. That same year, XM Radio recognized their momentum
by bestowing the band with the XM Nation Best New Blues Artist Award,
and word continued to spread about the new band with a veteran sound.

To complete the best trifecta of acknowledgements an emerging blues
artist could hope for, Zac Harmon was recognized again in 2006 when
The Blues According to Zachariah won a Blues Music Award for “Best New
Artist Debut” and he capped the celebration with a rowdy performance
at the award ceremony in Memphis. Zac Harmon was also featured in the
June/July 2006 issue of Blues Revue, as one of the 10 artists that
represent the future of the blues.

From barroom bawdy selections like “Who’s Knockin’?” to the
spiritually reverent testimonial “Mighty High”, expect to hear
energetic, feel good rhythm and blues handsomely delivered and ideally
suited for holiday time at the Green Parrot.
The Green Parrot Bar is your Southernmost Center for Culture of All
Kinds at the
corner of Whitehead and Southard Streets.
For additional information call The Green Parrot at 294-6133.