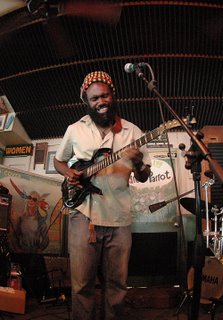 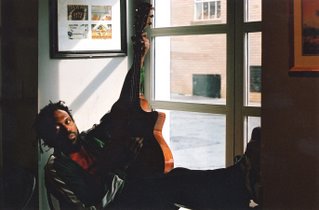 In what is certainly the Parrot’s biggest musical coup of this year,
or perhaps any other, the young blues legend and giant talent Corey
Harris will will perform with his 5 x 5 band at The Green Parrot Bar
on Wednesday, Thursday and Friday nights, December 13th, 14th and
15th beginning at 10 PM with 5:30 P.M “soundcheck” on Thursday and
Friday.
“We are so excited about having Harris at The Parrot,” says the
usually composed manager John Vagnoni. And why not, a coveted
performer at the New Orleans Jazz and Heritage Festival, as well as
the North Sea Jazz Festival, the Montreux Jazz Festival, the Montreal
Jazz Festival, the WOMAD festivals in England and the Canary Islands
and the Festival International in Lafayette, Louisiana, he has
traveled to Brazil and West Africa with the US State Department’s Jazz
Ambassadors program. In the course of his travels Corey has shared the
stage with BB King, Tracy Chapman, Natalie Merchant, the Wailers,
Burning Spear, The Dave Matthews Band, and Ben Harper, among many
others.
Since Harris shook up the blues scene with his 1995 debut release,
Between Midnight and Day, a masterpiece of rural blues exploration,
he’s been finding ways to extend the journey, composing new songs,
reinventing old ones, following his instincts fearlessly wherever they
might lead. As a singer, songwriter and cultural emissary he has
merged blues, African pop, rock and electronica in brilliant and
original ways.
He has built a worldwide following among musicians and fans alike.
Rolling Stone gave his rocking 2002 release, “Downhome Sophisticate”
four stars. Acclaimed film director Martin Scorcese tapped Corey to
star in and narrate the documentary film, “Feel Like Going Home.”
Filmed in Mississippi and Mali, West Africa, it tells the story of the
blues from African origins,
ABSOLUTE SOUND magazine said of him, “Harris… dazzles on guitar, but
his sound is… galaxies beyond a primal acoustic-blues palette.
Drinking from the African well, Harris updates his brand of 21st
Century blues with funk, hypnotic bottleneck boogie, lap steel drawl,
reggae, samba, and, hip-hop. He’s a vocal chameleon, speaks and sings
in different voices, and his 5×5 band unaffectedly adapts to stylistic
shifts. Historically rooted but progressive sounding, I can’t help but
compare Harris’ vision to that of Jimi Hendrix”
“If you’re looking for a sound, they’ve got one in spades”, said
Robert Christgau of The Voice .
Daily Bread, Corey’s most recent release on Rounder records,
represents the culmination of years of touring and recording. Hailed
by Billboard magazine as “a gem, Corey and his electric band, the 5×5
(with John Gilmore on drums and Houston Ross on bass) are taking the
music world by storm. Offbeat magazine calls Corey “one of America’s
more vital roots artists, so deep inside himself that he remains
uncategorizable.”
. National newspapers and magazines climb all over each other to
accurately describe CoreyHarris and his music. Blues Revue magazine
says, “Harris is a rarity, a throwback to a lost era and an innovator
as well. Dynamic fingerpicking and other-worldly singing.” The
Chicago Sun-Times raves, “Harris draws such resonance and varied tonal
quality from his National (guitar) that it sounds at times as if
several guitarists are playing.”
Experience Corey Harris and his 5 x 5 band for yourself. up close and
personal at The Green Parrot Bar, your Southernmost Center for Blues
Culture at the corner of Whitehead and Southard Streets.
For additional information call The Green Parrot at 294-6133.