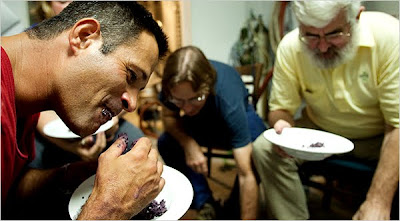 By JOYCE WADLER for The New York Times
Published: September 8, 2009

SAM CALAGIONE, the founder of Dogfish Head Craft Brewed Ales, has a taste for exotic brews. There is Midas Touch, created from sediment found on drinking vessels in the tomb of King Midas in Turkey, and Chateau Jiahu, inspired by trace ingredients from a 9,000-year-old dig in China.

But his latest seemed extreme, even for an extreme brewer. He planned on making a batch of chicha, a traditional Latin American corn beer.

And in order to follow an authentic Peruvian method as closely as possible, the corn would be milled and moistened in the chicha maker’s mouth.
In other words, they spit in the beer.

“You need to convert the starches in the corn into fermentable sugars,” the always entertaining Mr. Calagione said by phone from his headquarters in Rehoboth Beach. “One way is through the malting process. But another way — there are natural enzymes in human saliva and by chewing on corn, whether they understood the science of it, ancient brewers through trial and error learned that the natural enzymes in saliva would convert the starch in corn into sugar, so it would ferment. It may sound a little unsavory. …”

“The fact is that this step happens before you brew the beer, so it’s completely sterile,” he continued. “It’s boiled for over an hour.”

Won’t it take an awful lot of people to create a commercial beer?

“We’re going to have an archaeologist and historians and brewers sitting around and chewing 20 pounds of this purple Peruvian corn,” he said. “You kind of chew it in your mouth with your saliva, then push with your tongue to the front of your teeth so that you make these small cakes out of it, then lay them on flat pans and let them sit for 12 hours in the sun or room temperature. That’s when the enzymes are doing their work of converting the starches in that purple corn.”

For a hilarious blow-by-blow description of the purple-corn chewing marathon at the Dogfish Head Brewery read the full New York Times story here. 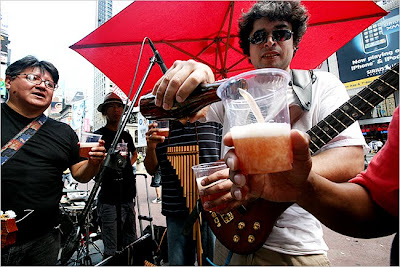 photo credit Librado Romero/The New York Times
The musicians of Agua Clara, an Andean band found playing in Times Square, and whose members come from Peru, Chile, Ecuador and Japan, tasted the chica and weighed in.
They smiled broadly as the cool chicha was poured. Then they tasted it and three made faces.

“This is not chicha,” Angel Marin (Ecuador) and two others said, almost simultaneously.

“It’s supposed to be sweeter,” said Martin Estel (Peru). “It’s not bad though.”

Asked about the chewing and spitting method, Mr. Marin said that it was “old school — in the jungle.”

He also made a suggestion: “You want chicha, you should go to Queens, or any Peruvian or Chilean restaurant.”