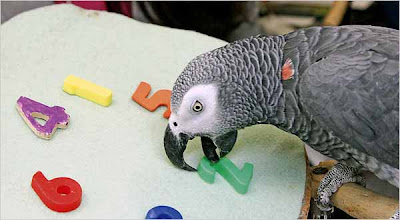 According to an article in yesterday’s New York Times, Alex, the famous African Grey parrot who mastered a surprising vocabulary of words and concepts, died unexpectedly last week at the age of 31, said Dr. Irene Pepperberg, a comparative psychologist at Brandeis University and Harvard who studied and worked with the parrot for most of his life and published reports of his progress in scientific journals.
Dr. Pepperberg used an innovative approach to teach Alex. African Greys are social birds, and pick up some group dynamics very quickly. In experiments, Dr. Pepperberg would employ one trainer to, in effect, compete with Alex for a small reward, like a grape. Alex learned to ask for the grape by observing what the trainer was doing to get it; the researchers then worked with the bird to help shape the pronunciation of the words.

Alex showed surprising facility. For example, when shown a blue paper triangle, he could tell an experimenter what color the paper was, what shape it was, and — after touching it — what it was made of. He demonstrated off some of his skills on nature shows, including programs on the BBC and PBS. He famously shared scenes with the actor Alan Alda on the PBS series, “Look Who’s Talking.”

Like parrots can, he also picked up one-liners from hanging around the lab, like “calm down,” and “good morning.” He could express frustration, or apparent boredom, and his cognitive and language skills appeared to be about as competent as those in trained primates. His accomplishments have also inspired further work with African Grey parrots; two others, named Griffin and Arthur, are a part of Dr. Pepperberg’s continuing research program.

Even up through last week, Alex was working with Dr. Pepperberg on compound words and hard-to-pronounce words. As she put him into his cage for the night last Thursday, Dr. Pepperberg said, Alex looked at her and said: “You be good, see you tomorrow. I love you.”

He was found dead in his cage the next morning, and was determined to have died late Thursday night.