Yojimbo returns at 5:30 and 10 PM today, Friday, January 11th,  with their bodacious blend of funk, hip-hop, rock and improvised experimentation to the Green Parrot 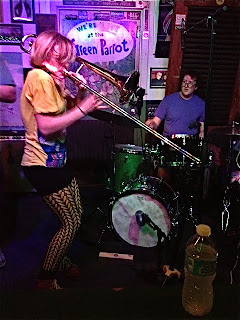 The story of three selcouth savages (rare, untamed artists) who arrived in a hip music town to act as Guardians of the Groove for the people. In music  Yojimbo means Funk.
Composed of twisted keys and Moog bass player Doc Sharp, wild drummer and percussionist Radam G, and trombone beast with wicked dance moves Carly Meyers, this young group formed two years ago and have been making their way around the New Orleans music circuit ever since.
Adam and Carly came down from Denver in 2008, and the fates teamed them up with local key player Doc soon after. Individually these artists were already reputable players in their own right: Separately they have played at venues all over the nation, gigging at clubs, festivals, and arenas. The three joined forces to create the Funk known asYojimbo , and have been big in the New Orleans scene ever since. Their style is a bodacious blend of funk, hip-hop, rock and improvised experimentation that gives you the urge to shake your body and scream-just like Carly! The music is wild, versatile and a little something else that you just gotta see to believe.
Playing gigs everywhere from local favorites such as Blue Nile, Maison, One Eyed Jack’s, The Republic and the legendary Tipitina’s, this band remains a constant and respected act in the city. They have headlined with artists such as Johnny Vidacovich, James Singleton, Raekwon and Mike Dillon, to name a few. They have been described by fans as “wild”, “insane”, “funky as hell” and “the best band in the city!”Don’t miss Yojimbo at 5:30 and 10 today at The Parrot.  These musicians are definitely worth the jump down the rabbit hole.