Cumbia/Funk Fusion Xperimento Returns to The Parrot
Xperimento the 7-piece Columbian-roots/cumbia funk/reggae band returns to The Green Parrot stage  on Friday and Saturday, November 22nd and 23rd , with shows at 5:30 and 10 p.m.
Voted Miami’s Best Fusion Band 2011 by Miami New Times, Xperimento   is something only Miami could cook up. It plays a blend of cumbia, reggae, salsa, funk, timba, rumba, tango and dub, creating a sound that reflects the diverse mixture of cultures and genres that Miami has to offer.
The band has strong ties to two other Miami groups known for mixing new rhythms: Suenalo and the Spam Allstars, both well known to Parrot patrons for their past pelvis-grinding Parrot performances.
Xperimento  has released three independent CDs in the last two years and improvises nearly 90 percent of its repertoire, giving the band its name, Xperimento 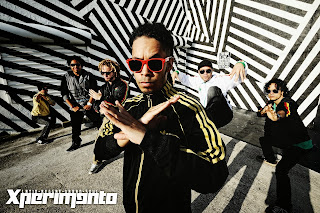 Pioneers of the fusion music happening now in Miami, Xperimento  began as a side project of Locos por Juana (Crazy for Jane), a Latin fusion band that blends cumbia, reggae, funk, rock, R&B, and hip-hop. Since releasing their first two CDs in 2002 and 2005, they have been selected as a Billboard magazine “Hot Pick,” a “Best US Band” by BBC News, “Best Latin Rock Band in Miami” by the Miami New Times, and been nominated for a Latin Grammy.
Love Lane Gang Returns to Green Parrot
The Love Lane Gang brings their eclectic mix of Swing, jump swing, jug band – anything goes to The Green Parrot stage on Thursday, November 28th,  beginning at 9 PM 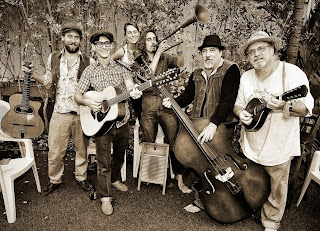 The Love Lane Gang plays music that spans generations, as well as embodies them. The emphasis is on swing: classics from the 1920s, 1930s, and 1940s, done in a refreshing new style that incorporates the Hot Club approach with island flourishes. Dust Bowl ballads, old school country from Hank Williams and Johnny Cash, rockabilly and surf music classics and little-known gems, and tunes from Sixties stars like The Beatles and The Kinks, all fit in alongside original songs that sound like they could have come from any of those eras. Offbeat instrumentation like mandolin, accordion, ukulele, washboard, and a kazoo horn section add to familiar guitar, bass, and harmonica, creating a broad musical palette which they use to color their performances. But you needn’t pay too much mind to all that serious musical analysis – it’s just plain fun
Dave “Biscuit” Miller Funks It Up at The Green Parrot 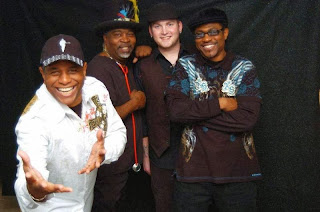 Miller was chosen Midwest Beat Magazine’s “Entertainer Of The Yearf
for a combination of reasons ––
his dedication in spreading the love of music to the youth of the
area; his musical work ethic shown in his doubling as bassist with The
Lonnie Brooks Band as well as fronting his own combo, The Mix; for his
always giving 100% when on stage; and for the simple fact that he does
a remarkable job “entertaining” folks.
Inspired to quit college after being drafted as a backing
musician for the legendary Rufus Thomas, Miller has never looked back
in regret on his decision to chase the musical muse that touched his
soul.
Miller is a jigsaw puzzle made up of strangely shaped pieces.
He’s a little Rufus Thomas, a little James Brown, a little Bootsy
Collins and when he flashes that broad faced smile, there’s even a
little touch of Ben Vereen as “Chicken George” (from “Roots”) in there
as well.
Biscuit played with Lonnie Brooks for many years, and is one of the
best blues bassists out there. But he’s not “just a blues bassist. He
plays a mixture of blues, soul, r&b and funk. Biscuit‘s chop bag is
bottomless, and contains everything from mathematically spaced eighth
notes, endless permutations of blues walk-ups and downs, thumps,
plucks, taps — you name it, it’s in there.
.   The Green Parrot Bar is your Southernmost Center for Culture at
the corner of Whitehead and Southard Streets.  For additional
information call The Green Parrot at 294-6133.
Larry Baeder and Friends Offer Green Parrot Tribute to Jimi Hendrix

The Green Parrot will celebrate what would have been the 71th birthday of seminal psychedelic rocker Jimi Hendrx on Wednesday, November 27, a t9 PM
The Tribute, co-hosted by Larry Baeder and Tony Baltimore, will include Francois Gehan, Anthony Picone, Bill Blue, Dora Gholson, Alphonse and more, all  offering their renditions of Hendrix songs.
Despite a limited mainstream exposure of four years, Hendrix is widely considered to have been the greatest electric guitarist in the history of popular music, and one of the most influential musicians of the 20th century.

Influenced musically by American rock and roll and electric blues, following initial success in Europe with his band the Jimi Hendrix Experience, he achieved fame in the US after his 1967 performance at the Monterey Pop Festival. Later, he headlined the Woodstock Festival in 1969, and the Isle of Wight Festival in 1970.
Instrumental in developing the previously undesirable technique of guitar amplifier feedback, Hendrix favored overdriven amplifiers with high volume, gain and treble. He helped to popularize use of the wah-wah pedal in mainstream rock, which he often used to deliver tonal exaggerations in his solos. He also pioneered experimentation with stereophonic phasing effects in rock music recordings.