For Scots, a Scourge Unleashed by a Bottle of “Wreck The Hoose Juice”

“It’ll blow your head off,” 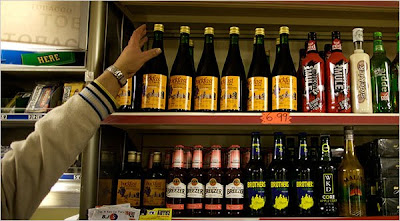 Buckfast is 15 percent alcohol by volume, a bit stronger than most wines. Each bottle has as much caffeine as eight cans of Coke.

Buckfast has emerged as a symbol of Scotland’s entrenched drinking problems at a time when it is urgently debating how to address them…the drink had been mentioned in 5,638 crime reports between 2006 and 2009 (the bottle was used as a weapon in 114 of them)….…some people call it Coatbridge Table Wine (others call it “loopy juice,” or, adding their own twist as they channel Travis Bickle, “Who’re you lookin’ at?” wine.)…
The complete New York Times  article follows:


The New York Times
By SARAH LYALL
Published: February 3, 2010
COATBRIDGE, Scotland — What is it about Buckfast Tonic Wine that makes it so alluring to consumers and yet so repulsive to politicians?

Buckfast is considered a regional favorite in Coatbridge.
Perhaps it is its special caffeine-and-sweet-wine recipe, which allows overly enthusiastic consumers to be tipsy and bouncy at the same time. Perhaps it is its array of snappy nicknames, including “Wreck the Hoose Juice” — hoose being a Scottish pronunciation of house — or its exotic provenance as the product of wine-making Benedictine monks at an abbey in England.

Whatever the cause, Buckfast has emerged as a symbol of Scotland’s entrenched drinking problems at a time when it is urgently debating how to address them. “For a large section of the Scottish population, their relationship with alcohol is damaging and harmful — to individuals, families, communities and to Scotland as a nation,” the Scottish government said in a recent report.

Buckfast does not seem to help. In a survey last year of 172 prisoners at a young offenders’ institution, 43 percent of the 117 people who drank alcohol before committing their crimes said they had drunk Buckfast. In a study of litter in a typical housing project, 35 percent of the items identified were Buckfast bottles. And the police in the depressed industrial district of Strathclyde recently told a BBC program that the drink had been mentioned in 5,638 crime reports between 2006 and 2009 (the bottle was used as a weapon in 114 of them).

A spokesman for J. Chandler & Company, which distributes the drink, said that Buckfast accounted for less than 1 percent of the alcoholic beverage market in Scotland and was being unfairly singled out. Nor, he said, is wine-making a sign that the monks of Buckfast Abbey have strayed from the teachings of St. Benedict, an accusation recently leveled by an Episcopal bishop.

“It’s always wise to remember that Jesus turned water into wine,” the spokesman, Jim Wilson, said in an interview.

Britain as a whole has finally accepted that it has a drinking problem that goes beyond fears about binge drinking. It is also realizing that the measure enacted in 2005 to address it — allowing pubs to remain open 24 hours a day, to avoid the last-minute rush — has failed. But if the problem is grave in England, it is worse in Scotland.

On average, Scots age 16 and older drank the equivalent of 12.5 quarts of pure alcohol each in 2007, the eighth highest rate in the world (In England, the figure was 10.5 quarts per capita). The government estimates that alcohol misuse costs Scotland $3.6 billion annually in health and social problems and loss of productivity.

A multipronged bill wending its way through the Scottish Parliament would, among other things, force retailers to charge a minimum price per unit of alcohol, ending the special deals that have helped reduce its price by 70 percent in real terms over the last 30 years. But opposition lawmakers oppose the bill, in part because it would have no effect on Buckfast, which already charges more than the proposed minimum amounts.

Legislation to curb drinking is of particular interest here in Scotland’s old industrial heartland, or the “Buckfast Belt,” where Buckfast is considered a regional favorite. The drink is so ubiquitous in this working-class town, not far from Glasgow, that some people call it Coatbridge Table Wine (others call it “loopy juice,” or, adding their own twist as they channel Travis Bickle, “Who’re you lookin’ at?” wine.) Buckfast is no newcomer to the market, having become popular in the first half of the 20th century, when it was prescribed by doctors for down-in-the-dumps miners and sold in drugstores.

One person’s helpful mood improver, though, is another’s worryingly effective stimulant. The drink is 15 percent alcohol by volume, a bit stronger than most wines. Also, each 750 milliliter bottle contains as much caffeine as eight cans of Coke.

In the United States, the Food and Drug Administration is considering banning caffeinated alcoholic drinks, which can make people uninhibited from the alcohol but also hyper, anxious and combative from the caffeine and sugar.

“It’ll blow your head off,” said James Grimson, smoking a cigarette outside a pub near the center of Coatbridge recently, speaking of Buckfast.

“It’s why a lot of fights happen around here on Saturdays,” said Umair Ansar, who works at a newspaper store in town.

The drink is favored by young, rowdy men with a taste for making trouble — “neds,” they are called in Scotland. Hard-core aficionados drink two or three bottles in succession, right down. “They say it doesn’t taste the same out of a glass,” explained a passer-by, Martin Rooney, 48.

“It goes straight to your head,” he said, “but it’s not my cup of tea.” (Mr. Rooney noted that his cup of tea is half a bottle of vodka a night.)

Buckfast comes in an attractive bottle illustrated with a friendly looking bunch of grapes. It would seem to be an acquired taste. To the neophyte sampler, it evokes a thick, sweet wine — sherry, perhaps — fortified with cola and Vivarin.

“Have you ever tried Benalyn cough syrup?” asked Sharon Macauley, a sales assistant at G & B’s Newsbox general store, which does a brisk business in Buckfast.

In walked 30-year-old John Miller, ready to procure his daily dose, a bottle and a half.

Mr. Miller was hard-pressed to articulate what he likes about Buckfast. “You get used to it,” he said.

He said that Buckfast had been unfairly singled out as the cause of all the drink-related ills in Scottish society. “You see people with lager and vodka who are fighting just as much,” he said. “It has nothing to do with Buckfast.”

Five years ago, Cathy Jamieson, then Scotland’s justice minister, said that Buckfast was “related to antisocial behavior,” and called on liquor stores to limit or ban sales of the drink.

But Ms. Jamieson’s message was diluted by the boisterous presence of a group of local youths, who surrounded her, chanting, “Don’t ban Buckie! Don’t ban Buckie!” as she spoke. And the plan backfired, anyway; regional sales of Buckfast soared. 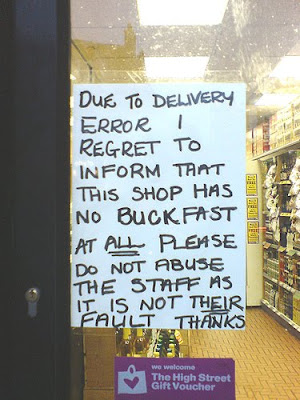 Vociferous at the thought of it being banned, their loyal fan base apparantly don’t fancy it when it runs out either.