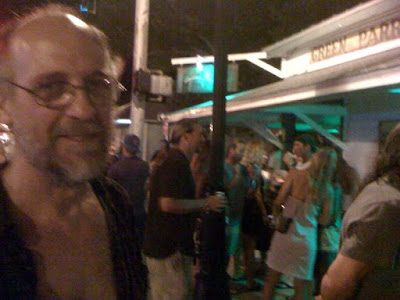 Here’s my friend Steve outside the Parrot last night while Suenalo was on break.

Standing there we heard someone mention that it was exactly forty years ago this weekend that Woodstock happened. Steve said he was there and from his memory bank  offered up  a few personal anecdotes of that weekend.
He was 15-year old  who happened to see the proposed line-up,  (Canned Heat, Credence, The Who, Blood, Sweat and Tears) and said hey, “I’m there”.
And so, with a buddy, hitchhiked up the New York State Thruway, actually arriving a day before the festival, in time to sit on a grassy hill and  watch the stage be built and the speaker towers erected. “My first real hit on carpentry”, he noted.
Once the stage was completed and the speakers in place he remembers thinking, “This is going to be cool”, and when the initial sound check blasted a recorded  version of Joe Cocker’s  “a little help from my friends” across the vast cow pasture he thought, “This is going to be really cool”.  “Hey, we were in ninth grade”, he added.
After sleeping out on that same hill that night, in the morning they walked down to the stage  to hear Richie Havens kick things off. “Well, you know what it looked like in the movie, well we were about fifty feet from that view, Richie Havens proceeded to just tear it up and my buddy said, “man, it’s eleven o’clock in the morning”. 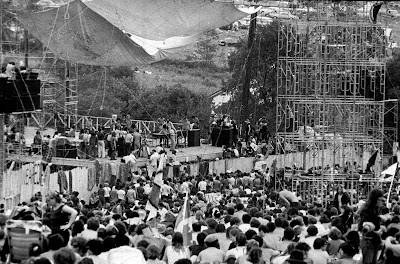 The music continued all day and into the night amid reports that there were people stuck in traffic fifty miles away that might not even get to the spot where Steve was for at least a day.”We were so glad we got there when we did and to this day I’ve made it a point never to be late for anything”.
He concluded his reminisence  by wondering, “How much fun could a couple of fifteen-year olds have?”, and adding,”but imagine if we had been eighteen”.

Another Woodstock anecdote, not from steve but from Paul Krassner
Paul Krassner wrote a piece for The Huffington Post about his Woodstock experience.
While The Who were performing, [Abbie Hoffman] went up on stage with the intention of informing the audience that John Sinclair, manager of the MC5 and leader of the White Panther Party, was serving ten years in prison for the possession of two joints; that this was really the politics behind the music.
Before Abbie could get his message across, Peter Townshend transformed his guitar into a tennis racket and smashed him on the head with a swift backhand. Townshend had assumed that Abbie was just another crazed fan. When The Who played at Fillmore East the previous week, a plainclothes cop rushed on stage and tried to grab the mike. He intended to warn the audience that there was a fire next door and the theater had to be cleared, but he was able to do so only after Townshend kneed him in the balls.