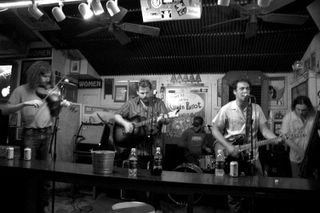 The Weary Boys, the alt. country quintet from Austin, Texas make their
much anticipated return to The Green Parrot on Friday and Saturday,
April 27th and 28th beginning at 10 0’clock. The Weary Boys will
also make a special appearances at 5:30 P.M. “sound checks” on
Friday, and Sunday, .
Five men in black taking Ralph Stanley, Bill Monroe, Lefty Frizell et
al., and spewing it back out with the fire and reflexivity of a bunch
of punks playing with a reckless spirit that’s the very definition
of “alternative country”.
The Weary Boys dress and look like the Nitty Gritty Dirt Band circa
1971 and play their instruments like it’s 1947. There’s little of the
sound of Texas to them; in fact, they sound like much less a Texas
country band than a Kentucky hillbilly band that happens to call the
Lone Star State home.
The quintet, with a repertoire that includes chestnuts from Ralph
Stanley, Bill Monroe, and Lefty Frizzell, features fiddle, stand-up
bass, a brushed snare and high lonesome tenors from guitarists Mario
Matteoli and Darren Hoff.
They are an act that can convincingly turn out hard-core, traditional
country fare with a flair that owes as much to the Stanley Brothers as
to the Clash.

The Green Parrot, your Southermost Center for Culture of All Kinds at
the corner of Southard and Whitehead Streets. For more information
call The Green Parrot at 294-6133.