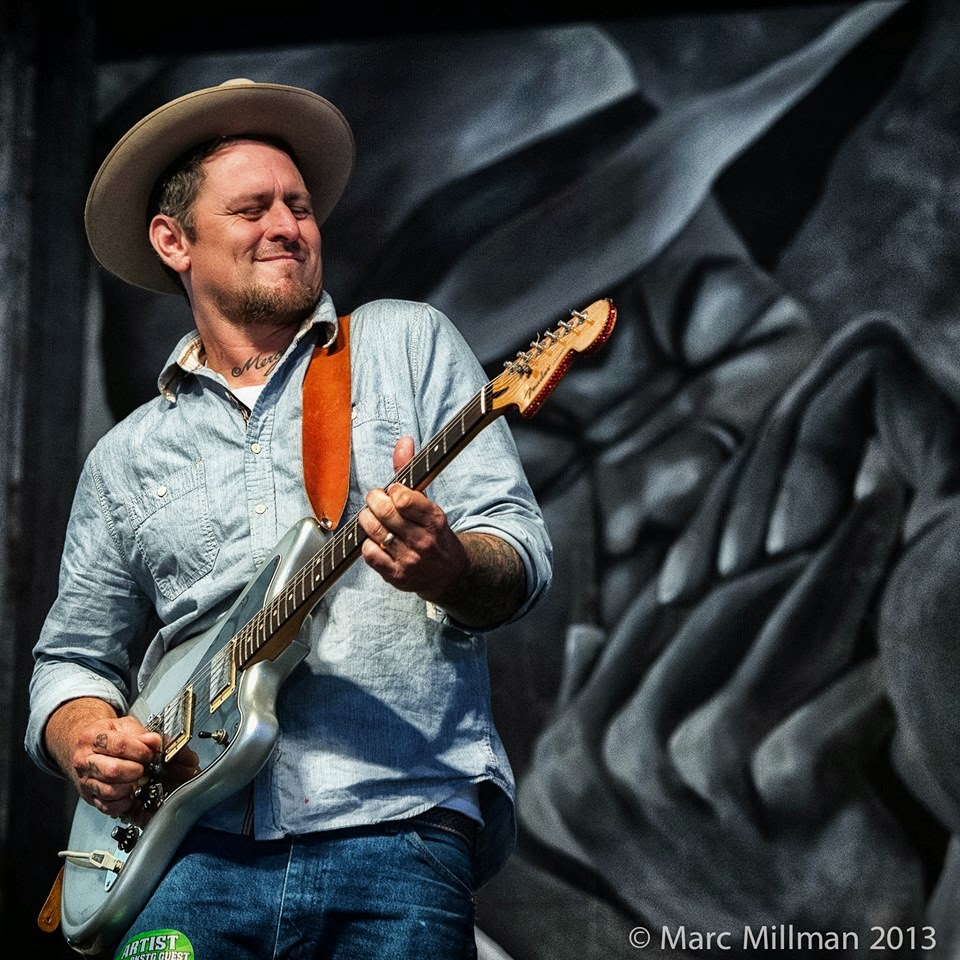 Sending the press out this morning I was reminded what a great week of music we had coming up so I thought I’d share it.

From Blue-eyed Soul from NOLA, to  up-and-coming blues-rocker Samatha Fish, to our homegrown-anything-goes jug band from the Lane of Love, to reconstructed rhumba from Spam and reconstructed Buena Vista Social Club from Jose Elias and Cortadito and wrapping up with David Grisman’s flat picking guitarist on a Wednesday evening, it’s gonna be quite a week!

Eric Lindell & The Sunliners Brings Blue-eyed Soul, Dive-Bar Credibility and Romping New Orleans R&B to The Parrot
California-born, New Orleans-schooled R & B singer/songwriter Eric Lindell and The Sunliners bring their blue-eyed soul, blues and boogie back to the Parrot stage for two funky, rootsy nights with shows at 9 p.m. Wednesday, February 12th and 5:30 p.m. and 9 p.m. on Thursday, February 13th.
With his cliché-free, hook-filled songs and dive-bar credibility, Lindell has taken the talent-heavy New Orleans club scene by storm and glowing reviews of recent recordreleases seem ready to launch Lindell into the musical mainstream.
Described by  Jazz News as an  “extraordinary, original artist who is just getting
His combination of sweet, blue-eyed soul, smoldering vocals and foot-stomping R&B have won him critical and popular acclaim across the country via half-dozen independent releases and countless nights in small clubs. 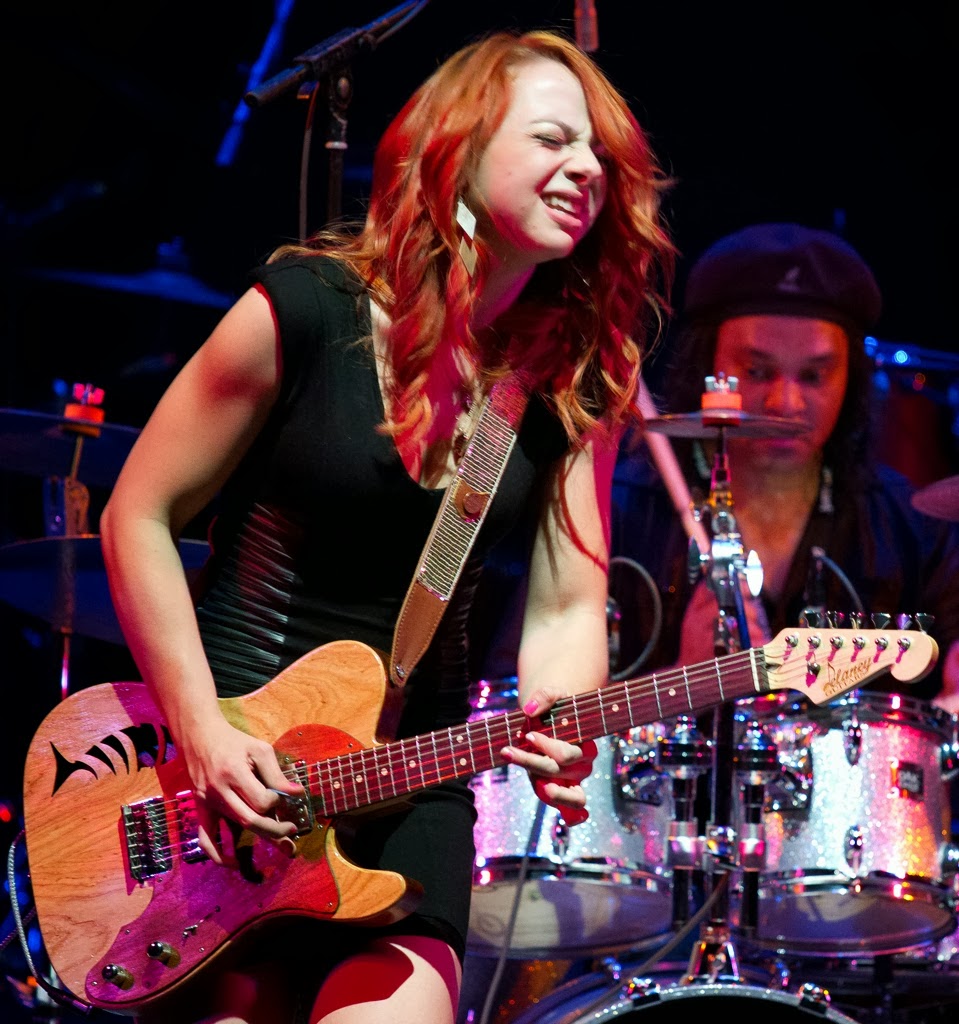 Crossing Musical Borders, Samantha Fish Makes Green Parrot Debut
Genre-Bending Samantha Fish makes her Green Parrot Debut on Friday, February 14th with shows at 5:30 and 10 PM.
Fish is classified as a blues artist, but she crosses many musical borders. Her set list  typically may include  a cover of “Tennessee Waltz”, a  jaunty version of Steve Miller’s “Jet Airliner,” John Hiatt’s “Native Son,”  or a lovely, mournful version of the Stones’ “Dead Flowers,” . You could also just as easily hearTom Petty’s “Louisiana Rain” and three Tom Waits covers: “Walking Spanish Down the Hall,” “Heart Attack and Vine” and “I Don’t Wanna Grow Up” (hers is more like the Ramones’ version).
Fish plays rhythm and leads on acoustic guitar, but for several songs, including covers of R.L. Burnside’s “Poor Black Mattie” and Junior Kimbrough’s “Nobody But You,” she showed some prowess on Dobro,
Fish, only in her mid-20s, displays an impressive knowledge of and respect for music of yore and the skills and polish that promise her a long, bright musical  future.
sLove Lane Gang Brings “Swing, Jug Band, Anything Goes!” to Green Parrot

The Love Lane Gang brings their eclectic mix of Swing, jump swing, jug band – anything goes to The Green Parrot stage on Saturday, February 15th,  beginning at 5:30 PMThe Love Lane Gang plays music that spans generations, as well as embodies them. The emphasis is on swing: classics from the 1920s, 1930s, and 1940s, done in a refreshing new style that incorporates the Hot Club approach with island flourishes. Dust Bowl ballads, old school country from Hank Williams and Johnny Cash, rockabilly and surf music classics and little-known gems, and tunes from Sixties stars like The Beatles and The Kinks, all fit in alongside original songs that sound like they could have come from any of those eras. Offbeat instrumentation like mandolin, accordion, ukulele, washboard, and a kazoo horn section add to familiar guitar, bass, and harmonica, creating a broad musical palette which they use to color their performances. But you needn’t pay too much mind to all that serious musical analysis – it’s just plain fun 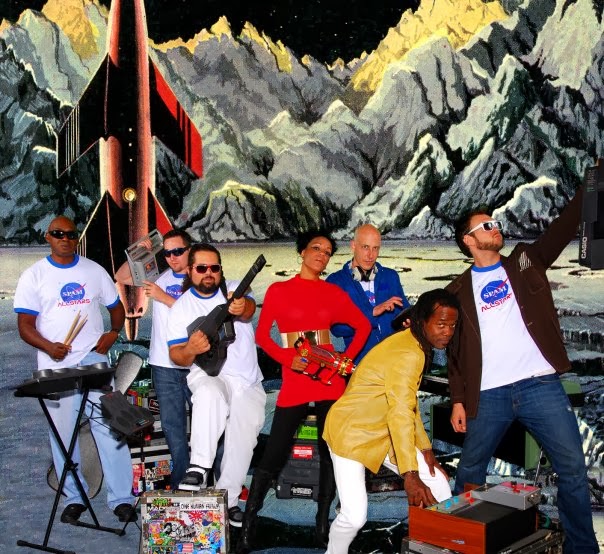 Blending Latin, funk, hip hop and dub, the Spam Allstars make their highly anticipated return to The Green Parrot with shows beginning at 10 PM on  Saturday, February 15th and  9 PM on Sunday, February 16th.
A self-described descarga or Cuban jam session, DJ Le Spam and the Spam Allstars are a unique ensemble that has created their own niche on the national music landscape with a prolific recording routine and over 200 show dates a year.
Deftly combining the live performance of his stage-mates with a cornucopia of electronically-evoked samples, DJ Le Spam (Andrew Yeomanson) projects a distinctly modern voice that resonates of Miami’s very Latin and urban soundtrack. 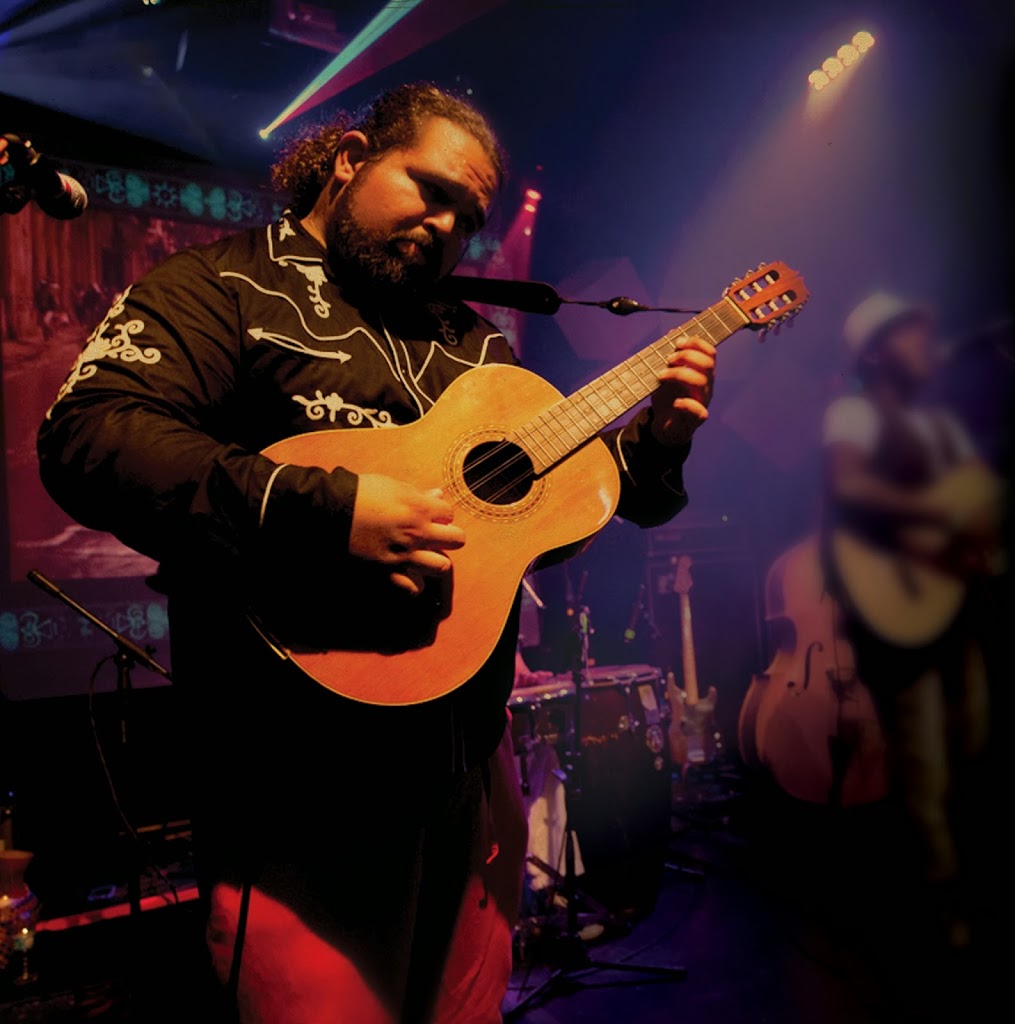 The Green Parrot presents  Miami’s premier Cuban Son group Cortadito on Sunday, February 16th at 5:30 PM
This is the latest project by Spam Allstars guitarists Jose Elias, joined by guitarist Julio Cesar Rodriguez, their music could best be described as sounding like the Buena Vista Social Club but in a smaller more intimate setting.
Cortadito is a traditional Cuban Son Duo which focuses on performing the music of early 20th century Cuban origins. From Son Montuno to Boleros and Bolero Son, this dynamic duo brings you back to a time when Trio Matamoros, or Ignacio Piniero ruled the airwaves. An era when popular music was Cuban Music and Son Montuno was influencing the world over. From time to time Cortadito is backed by a variety of guest musicians which gives the group a sound reminiscent of the Buena Vista Social Club. For their Green Parrot show Cortadito will be backed by Spam Allstars’ Mercedes Abel on flute and Tomas Diaz on timbales. 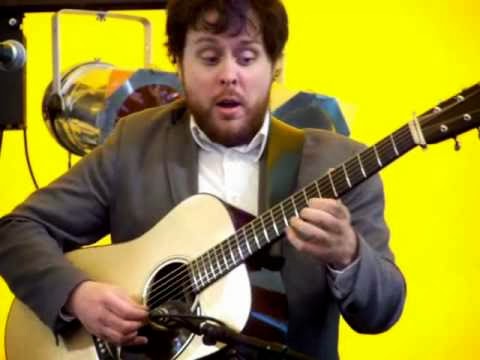 Flatpickers Grant Gordy and Ross Martin Bring Hot Licks to Parrot Stage
Flatpickers Grant Gordy (of The David Grisman Quintet) and Ross Martin promise an evening of Hot Licks at The Green Parrot bar on Wednesday, February 19th, beginning at 9 PM.
Being asked to assume the guitarists’ role in the fabled David Grisman Quintet, a spot previously held by such guitar notables as Tony Rice, Mark O’Connor, Frank Vignola and Mike Marshall, has firmly established
Gordy as one of the preeminent young voices on guitar. Just ask his boss, David Grisman, who says Gordy “belongs to the new elite of American acoustic practitioners who are pushing the ever-expanding envelope
of a musical frontier.”
His work has been widely recognized for its consistent excellence and diversity. He was featured on the covers of Flatpicking Guitar Magazine and Japan’s premier bluegrass magazine, Moonshiner.
He was recently written up in Just Jazz Guitar and in 2010, Acoustic Guitar Magazine celebrated his debut CD in its Top Ten Acoustic Albums of the Year.
Gordy’s music has captured the ears of major broadcasters and he’s been heard on National Public Radio’s Morning Edition, All Things Considered and the prestigious Tiny Desk Concerts. Gordy was selected in
2006 to be one of 15 participants in Carnegie Hall’s “Porous Borders of Music” workshop, led by acoustic music legends Edgar Meyer and Mike Marshall. He’s played at Bonnaroo Music Festival, the
Montréal Jazz Festival, Carnegie Hall, Hardly Strictly Bluegrass Festival in San Francisco and in the UK and Russia.
Guitarist Ross Martin has performed in concert halls, honky-tonks, theaters, rock clubs, living rooms, on festival stages, television programs and everywhere in between.
His musical path has covered as much territory as his physical one. Reflecting his love of diverse genres like

jazz, bluegrass, country, folk, experimental and classical music,  He has toured and performed with a wide range of artists including Matt Flinner, Tony Furtado, Ron Miles, Mollie O’Brien, The Motet, Caroline Herring, Dwele, Sonya Kitchell and many others. 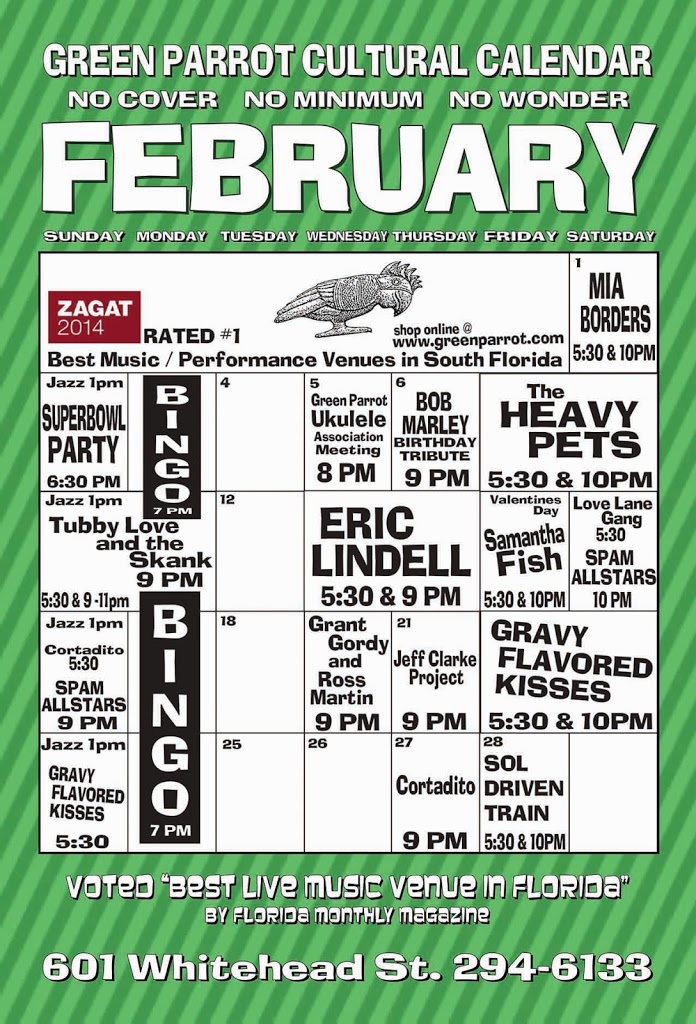