Watermelon Slim Plays The Green Parrot:  “a one-of-a-kind pickin’ and singin’ Okie Dynamo” with an ever-
expanding career of ramshackle grandeur.
While preparing the Press for this weeks music I started to get an idea for just how much of a treat we are in for this Thursday when Watermelon Slim hits the boards.
With a bio few can match and awards piled up like cordwood Slim appears to be the real deal. He’ll be appearing on Thursday, December 6th with shows at both 5:30 and 10PM 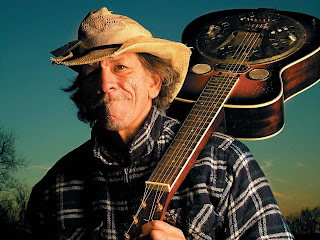 The  critically-acclaimed, award-winning blues artist Bill “Watermelon Slim” Homans  brings his hard-driving,  road-tested  blend of slide guitar, harmonica, and gravel-and-chains vocals to the Green Parrot on Thursday, December 6th with shows at 5:30 and 10 P.M.Bill “Watermelon Slim” Homans has built a remarkable reputation with his raw, impassioned intensity. HARP Magazine wrote “From sizzling slide guitar…to nitty-gritty harp blowing…to a gruff, resonating Okie twang, Slim delivers acutely personal workingman blues with both hands on the wheel of life, a bottle of hooch in his pocket, and the Bible on the passenger seat.” Paste Magazine writes “He’s one hell of a bottleneck guitarist, and he’s got that cry in his voice that only the greatest singers in the genre have had before him.” 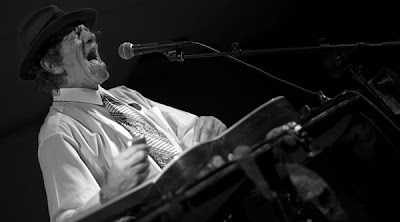 The industry agrees on all fronts. Watermelon Slim has garnered 17 Blues Music Award nominations in four years including a record-tying six in both 2007 & 2008. Only the likes of B.B. King, Buddy Guy and Robert Cray have landed six in a year and Slim is the only blues artist in history with twelve in two consecutive years. In Spring 2009 he was the cover story of Blues Revue magazine. Now, Watermelon Slim is making more waves with Escape From the Chicken Coop, his first-person account of the days he spent driving a truck. It is just one of many instances of a life spent changing gears.

One of Slim’s most impressive industry accolades may be the liner notes of The Wheel Man eagerly written by the late legendary Jerry Wexler who called him a “one-of-a-kind pickin’ n singing Okie dynamo.” Slim has been embraced for his music, performances, backstory and persona. He has appeared on NPR’s All Things Considered, The BBC’s World Service and has been featured in publications like Harp, Relix, Paste, MOJO, Oklahoma Magazine and Truckers News.
The Memphis Flyer led its terrific CD review with the question “Does anyone in modern pop music have a more intriguing biography than Bill “Watermelon Slim” Homans?”

Slim was born in Boston, his father was a progressive attorney and freedom rider and his brother is a classical musician. He was raised in North Carolina listening to the housekeeper sing John Lee Hooker songs. Slim attended Middlebury on a fencing scholarship but left early to enlist for Vietnam. While laid up in a Vietnam hospital bed he taught himself upside-down left-handed slide guitar on a $5 balsawood model using a triangle pick cut from a rusty coffee can top and his Army issued Zippo lighter as the slide.

opportunity to catch one of the most exciting and authentic blues performer of his generation, in the intimate setting of

The Green Parrot Bar,  your Southernmost Center for Culture of All Kinds, located at
the corner of Whitehead and Southard Streets.  For additional
information call The Green Parrot at 294-6133.
“his marble mouthed, Dr. John style southern drawl is as well suited to country music as it is to the blues, plus there is still some bluesy slide guitar spread throughout….” – L.A. Beat

“…pedal-steel guitar, mandolin, and banjo painting a colorful mix that’s light years behind, above, or beyond contemporary, whatever-it-takes-to-hit-big Country. Matter of fact, some of this stuff could be kin to work by Kris Kristofferson.” – Blurt Online

“…Slim’s croaky tones suit this honky tonkin’ at least as well as they do the blues – you don’t doubt for a second the love, lust, heartache or the loneliness about which Slim happens to be singing at any point. And his slide guitar rocks!” – Rhythms Magazine (Australia)