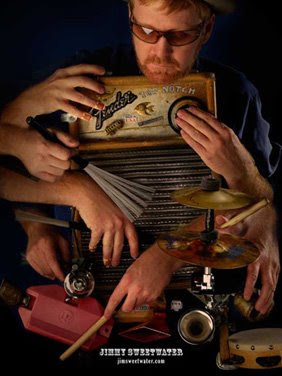 A local fixture of the San Francisco music scene for over fifteen years, Jimmy Sweetwater has developed a reputation as one of San Francisco’s premier washboard and harmonica players, having performed and recorded with numerous Bay Area acts. Prior to moving to San Francisco, he had already made appearances with a range of well known artists including Bo Diddley, country rocker Johnny Paycheck, and even the immortal Ella Fitzgerald, with whom he once shared the stage at a New England jazz festival. His playing can be heard on the CDs of dozens of Bay Area artists.

Playing the washboard with the sensibility of a drummer, he has developed his own versatile, percussive style, able to fill the niche of a traditional trap drummer. In fact Jimmy’s first instrument was drums

Jimmy was inspired to build his own washboard. Over the years he has developed a technique all his own, allowing him to integrate the washboard into many different musical styles.

While many people casually assume that a washboard player must play Cajun and related styles, this is not so with Jimmy’s playing. He has played washboard in many ensembles, ranging from old timey rural country to traditional electric blues rock to 1940s style Jazz to indie rock and singer-songwriter fare. This versatility is in fact related to his approach to the washboard, literally. While many washboard players use sticks, spoons or metal thimbles his setup sounds like a snare, and he produces his sounds using metal brushes.

The Green Parrot Bar is your Southernmost Center for Culture of All
Kinds, at the corner
of Whitehead and Southard Streets. For additional information call The
Green Parrot at 294-6133