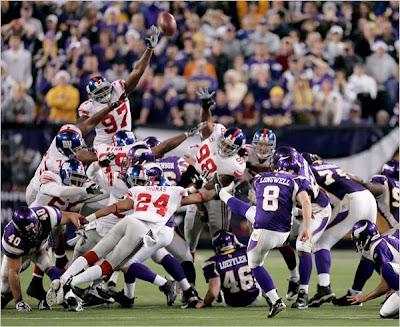 Ryan Longwell’s 50-yard field goal with 5 seconds remaining in the game clinched the N.F.C. North for the Vikings (10-6)
Minnesota needed the last-gasp field goal to book a playoff berth versus wild-card Philadelphia next week in Minneapolis. Philadelphia pummelled Dallas to punch their postseason ticket on a hectic final day of the National Football League regular season.
Eleven teams started the day in contention for the five remaining spots in the 12-team postseason.
They included San Diego and Denver, who faced each other in a clash to decide the AFC West division crown on Sunday night.
The Vikings got the ball rolling with a 20-19 victory over the reigning Super Bowl champion New York Giants, Ryan Longwell booting a 51-yard field goal as time expired for Minnesota.
The Vikings, who came into the day needing only to win to clinch the NFC North division title, rallied from a 19-10 fourth-quarter deficit to beat the Giants, who had already won their division and secured home field advantage throughout the playoffs.
Minnesota’s Adrian Peterson, who turned in a 67-yard touchdown run, rushed for a total of 103 yards and became the first Viking to claim an NFL rushing title.
He finished the season with 1,760 yards, the 20th-highest total in league history.
“Celebrate tonight, have a little fun, and come back to work on Tuesday,” Peterson said of the Vikings’ upcoming first-round playoff clash with Philadelphia. 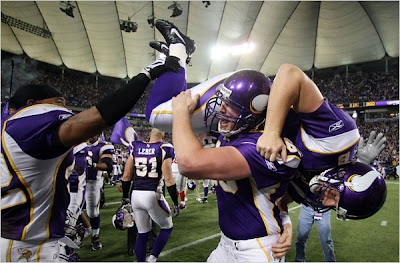 Having rebounded from a 5-5-1 start, often-maddening Philadelphia (9-6-1) will travel to Minnesota to play the Vikings in the National Football Conference wild-card round.

How ’bout them Cowboys!

Dallas (9-7), which had Super Bowl aspirations, goes home early and embarrassed. The team’s owner, Jerry Jones, must decide if he wants a new coach to usher in a new stadium next season. The Cowboys have lost six straight games to the Eagles in December and have lost every regular-season finale since 1999.

Eagles stomp Cowboys 44-6 to clinch playoff berth
Donovan McNabb flexed his muscles, seemingly mocking Terrell Owens. The always stoic Andy Reid played cheerleader, encouraging the crowd to make noise.
Many fans may not want the quarterback or coach back for another season. But they’ll be here for at least one more game — a playoff game.
The Philadelphia Eagles overcame daunting odds to capture an NFC wild-card spot with a dominating 44-6 victory over the Dallas Cowboys on Sunday.
The Eagles will play at NFC North champion Minnesota (10-6) next weekend.
So much for all that preseason Super Bowl hype — America’s Team can start its vacation plans early. Surely, it’ll be a drama-filled offseason, as owner Jerry Jones has to answer more questions about coach Wade Phillips’ job and perhaps consider a major overhaul.
In a game that become do-or-die for both teams shortly before kickoff, the Eagles (9-6-1) thoroughly outplayed the error-prone Cowboys (9-7) in every facet. McNabb threw two touchdown passes and ran for another, and Brian Dawkins forced two fumbles that were returned for scores.
Written off after a 10-3 loss at Washington last week, Philadelphia avoided elimination when Oakland upset Tampa Bay and Houston beat Chicago in the early games. The Raiders were 13-point underdogs against the Buccaneers, who lost their fourth straight.
Of all the teams that remained in contention for a playoff berth entering the final weekend, the Eagles had the lowest odds. Meanwhile, Dallas knew all week it just had to win to get in. 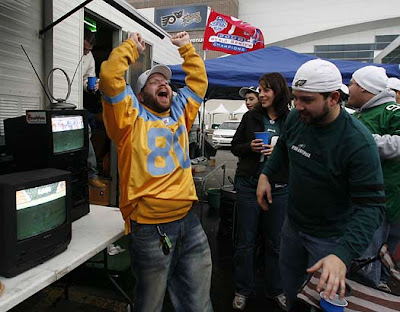 Eagles fans had plenty to celebrate before the game. Losses by Tampa Bay and Chicago meant the Birds could clinch a playoff berth by beating Dallas
How ’bout them Cowboys! 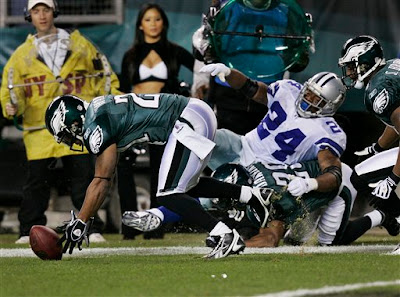 Dallas Cowboys running back Marion Barber (24) fumbles the ball as he is hit by Philadelphia Eagles Brian Dawkins and Joselio Hanson (21) recovers during the third quarter of an NFL football game Sunday, Dec. 28, 2008, in Philadelphia. Hanson ran the ball for a touchdown

Entering Sunday’s game, a playoff berth seemed remote for Philadelphia. But the unexpected happened when Tampa Bay lost at home to Oakland and Houston defeated Chicago. Handed renewed hope, the Eagles did not fumble it away as they had often done this season. Instead, Philadelphia dominated in ways familiar and unfamiliar while Dallas submitted meekly.