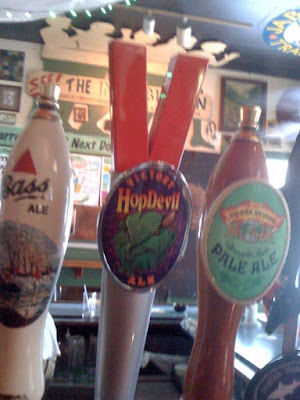 Victory Hopdevil Pale Ale is the newest addition to The Green Parrot stable of draft beers.

What did it replace you ask?
The British Royal Navy ship HMS Manchester  has weighed anchor after a week in port here, but not before our key west soccer team edged their ship’s team nine-zip, and then in the World Cup first round the American team beat England 1-1,  and not to bring any measure of jingoism into our bill of fare or equate this switch in beers with the “Freedom Fries” brouhaha of a few years back, but  with BP’s cavalier  attitude of late it seemed the time was right to give the Newcastle Brown Ale a rest and score one for the home team.
That said, since its 1996 beginnings in an old Pepperidge Farm bakery in Downington, Pennsylvania, Victory Brewing has earned a rabid following with brews such as the silky, low-alcohol Donnybrook Stout, the aromatic HopDevil IPA, and the Prima Pils.
Here’s a what some contributors to the BeerAdvocate had to say about it and here’s the Victory web page.