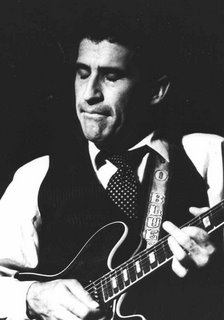 Hard-driving New York bluesman Tony O returns to The Green Parrot
stage and proudly features Big Apple guitar legend Bobby Ratcliff for
two very special nights of classic blues on Thursday and Friday
February 16th and 17th at 10 o’clock, with a special 5 PM sound check
on Friday afternoon.
Tony, who has maintained a long and close musical relationship
with many blues legends including Jimmy Rogers, James Cotton, Hubert
Sumlin and Pinetop Perkins, is excited to bring someone of Ratcliff’s
stature to the musically sophisticated and blues-hungry Parrot
patrons. Blues Revue magazine described Ratcliff as “…. a phenomenally
gifted musician whose soulful delivery, funky picking, and sparse,
stinging West side sound is distinctive and electrifying.”
It was actually Howlin’ Wolf and Hubert Sumlin who dubbed Angelo
Melio “Tony O” before the guitarist had turned 18. The name stuck
because as Tony says’ “when Howlin’ Wolf brands you with a name, you
keep it”.
Pinetop Perkins in featured on Tony’s latest cd “Ooh Wow” . Tony’s
earlier release with Pinetop Perkins, “Born in the Delta” was
nominated for a Grammy for Best Traditional Blues Album of 1998.
It has been said in The Southeast Entertainer that Tony-O is, “Blues
to the bone.”
We think so, too.
The Green Parrot Bar is your Southermost Center for Blues Culture, on
the corner of Southard and Whitehead Streets.
For additional information call The Green Parrot at 294-6133.