Granted, it doesn’t get one’s heart thumping as much as say, whale watching,  but for what it’s worth, right out in our  yard this morning.  we spotted and correctly ID’d this guy as  The Stock Island tree snail,  or Orthalicus reses reses, seen on Flickr here, a federally-listed threatened species of mollusk.

Not often one gets to find an endangered species right outside the kitchen window, and so for our money it might as well have been a Snow Leopard. Stock Island Tree Snail:
Historically, this arboreal snail inhabited the hardwood hammocks of Stock Island and Key West. Introduction of the snails to Key Largo and the southernmost parts of the mainland have met with little success. As of 1996, a small population still lived in Key West, but it is uncertain if they remain. The Stock Island Tree Snail was completely extirpated from Stock Island until, in September of 1998, the FWS provided funding to the Florida Audubon Society and the Key West Garden Club to relocate the snails from other populations back to the Stock Island Botanical Gardens.

This from The Journal of Moluscan Studies:
THE LIKELY CAUSE OF EXTINCTION OF THE TREE SNAIL ORTHALICUS RESES RESES (SAY)
The Stock Island tree snail, Orthalicus reses reses, went extinct in its native range in the Florida Keys in 1992. Fortunately, O. r. reses has been introduced elsewhere and further reintroductions are currently planned. Before these reintroductions are implemented, it is important to try and determine which factors were most likely to have caused the decline and extinction. While habitat destruction was prob-ably the ultimate reason why there were so few tree snails, it is likely that an interaction of habitat frag-mentation and the invasion of an exotic predator caused the final decline that lead to the extinction in 1992. We examined the last 93 O. r. reses shells to infer cause of death. In addition, using surrogate Florida tree snails, Liguus fasciatus, we conducted experiments on two previously unstudied causes of mortality: predation by red imported fire ants, Solenopsis invicta, and mortality from falls caused by wind. 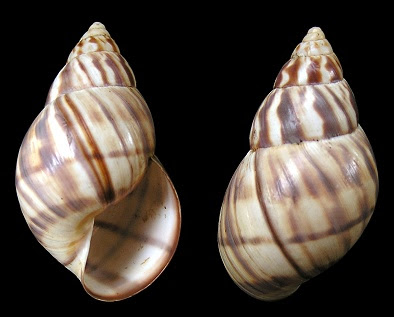 We found that the majority of the last O. r. reses shells were intact, indicating that mammalian and bird predation were not the greatest causes of mortality. Mortality caused by wind knocking tree snails onto the rocky hammock substrate appeared to be a potential source of mortality, but few of the tree snails exhibited signs of breakage. Mortality from fire ants appears to be one of the most likely causes of the recent decline and extinction of O. r. reses. Experiments indicated that in a semi-natural enclosure, fire ants were capable of killing all ages of L. fasciatus, even during aestivation. Fire ants are currently found throughout the last known habitat of O. r. reses and were first discovered in this area at the time of the decline.

(As a footnote, I just looked and he’s still there).