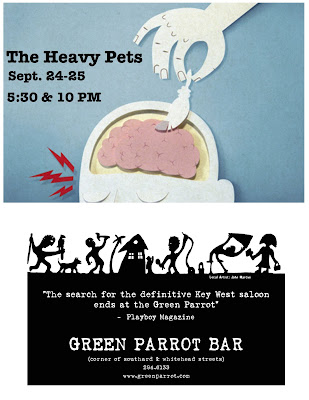 “The Heavy Pets return to The Green Parrot on Friday and Saturday, September 24th and 25th with shows at 5:30 and 10 P.M.The Heavy Pets are an American rock and roll band whose contagious vibe blends rhythm and blues, jazz-funk and reggae fusion with homegrown rock and roll. The Heavy Pets are known for powerhouse performances spiked with hot electric licks and multi-climactic instrumental solos, as well as for their masterful acoustic acumen.
In 2007, the group became an instant Sirius radio sensation with the release of their acclaimed double-disc debut album, Whale, driven by hit tracks “Operation of Flight” and “Sleep.” Major festival darlings, The HeavyPets are regulars at Bonnaroo, moe.down, Langerado, New Orleans Backbeat Jazzfest, and their namesake PetZoo, a two-day, multi-band festival that draws hordes of Pets devotees to Bucks County, PA, to feast on the headliners’ live alchemy.
The Heavy Pets seemed to have gotten a makeover. The South Florida jam band sports a new label, a new booking agency and they’ve just released a polished new album with the help of a heavy-weight producer.
But these five guys – guitarists Mike Garulli and Jeff Lloyd, keyboardist Jim Wuest, bassist Justin Carney and drummer Jamie Newitt – are sticking to what has worked for them for the past few years: endless touring, hitting every major city in the Northeast, South and Midwest as well as a host of summer festivals.