Growlers — 64-ounce glass vessels that look like a moonshine jug — have become the beer accessory of the moment. And the jugs, filled at taps in bars and stores, are not just the toys of the bearded, flannel-shirt, beer-geek set. 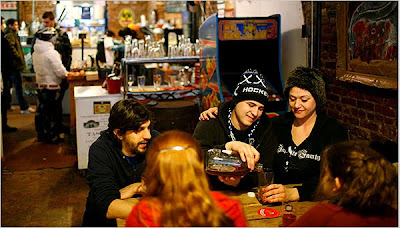 Liz Thorpe, vice president of Murray’s Cheese, said she had two to four growlers at home at any given time. “Good beer makes everything more special,” Ms. Thorpe said while stocking up for a recent National Football League playoff game. “I like me some football, but I don’t like me some Coors Light. So I’m ensuring I will be happy this afternoon.”

Here’s the entire article from this morning’s New York Times
Todd Heisler/The New York Times
BY midafternoon on a recent Saturday, Bierkraft, the beer emporium and grocery on Fifth Avenue in Park Slope, Brooklyn, was half-filled with customers, many of them parents with babies or toddlers in tow. They were browsing the more than 1,000 varieties of bottled beer or surveying the listing of selections available on the 13 taps and 3 cask lines. Some carried a good-sized satchel.

They drink it there or take it out. Offerings change daily.

At the Whole Foods on Houston Street, growlers make up half the beer store’s business.
Diaper bag? Gym clothes?
No. It was a tote for their growlers.

Growlers — 64-ounce glass vessels that look like a moonshine jug — have become the beer accessory of the moment. And the jugs, filled at taps in bars and stores, are not just the toys of the bearded, flannel-shirt, beer-geek set.

“In the beginning we tried to figure out, ‘Who’s going to be our market?’ ” said Ben Granger, 32, an owner of Bierkraft, which began filling growlers in spring 2006. “We thought, mullet-heads and beer-bellied dudes. But the first run was ladies with strollers. They will tell you they’re buying them for their husbands. Three weeks later, they’ve got two. One’s his and one’s hers. The next one that caught me by surprise was dads coming in with their kids. Then there’s the beer crowd who’ll rush in to get on this or that before it’s gone. There’s no age limit.”

Michael Endelman, a journalist at Rolling Stone, is one of those growler-loving fathers. “I don’t go to bars too much anymore,” he said, gesturing to his baby daughter Mimi. “It just seems like a great way to be a beer geek without going out.”

Some customers appreciate growlers for reasons of economy (refills range from $8 to $20 or more) or ecology. And as more craft brewers choose not to bottle their products, many fans like the idea of getting fresh beer that until recently was sold only in specialized bars.

Liz Thorpe, vice president of Murray’s Cheese, said she had two to four growlers at home at any given time. “Good beer makes everything more special,” Ms. Thorpe said while stocking up for a recent National Football League playoff game. “I like me some football, but I don’t like me some Coors Light. So I’m ensuring I will be happy this afternoon.” Barely a week has passed in recent months without some bar or beer store in New York City trumpeting the arrival of growlers, which are typically embossed with the name of their business. Even the Gristedes grocery chain has gotten in on the act; the University Place store in Manhattan began carrying them in November.

Offerings can change daily, even hourly.

Some new growler users believe they’re getting in on the latest thing, but beer lovers know better.

“Growlers have been around since Christ was a child,” Mr. Granger said. “We’re not doing anything new.”

In the late 19th century and the early 20th century, both The New York Times and The Brooklyn Eagle regularly published contentious stories about the containers, which then took the form of small galvanized pails. The articles cataloged the complaints of saloon keepers, who thought growlers cut into their profit, and those of temperance groups, who hoped to curb home drinking.

“Rushing the growler,” connoting children hustling pails of beer for adults from bar to table, was a common expression. The curious name is thought to be inspired by the rumbling noise escaping carbon dioxide made as the beer sloshed about in the pail.

In more modern times, growlers could be found at brew pubs like Heartland Brewery, which has served beer to go since opening in 1995. The jugs — which, according to the New York State Liquor Authority, have always been legal at both retail outlets and bars — have proliferated lately, said Heartland’s founder, Jon Bloostein, because there are more interesting beers to go in them.

“People’s palates have become more sophisticated,” Mr. Bloostein said. “Look at the number of beer bars in Manhattan, and especially Brooklyn. And the offerings at regular bars are leaning toward craft beers.”

The Whole Foods beer store on Houston Street began its program in 2007. The chain’s first to carry the vessels, it has done as much as any store to introduce New Yorkers to growler culture. The manager, Jeff Wallace, said he saw other reasons for the trend.

“It’s basically a really good way to promote recycling, because you bring back your jug,” Mr. Wallace said. “And it’s a cheap and affordable way to get fresh draft beer.” He said growlers made up half the beer store’s business. Whole Foods stores in TriBeCa and on the Upper West Side also offer beer for growlers.

That much-vaunted freshness, however, depends on how the bottle is filled. 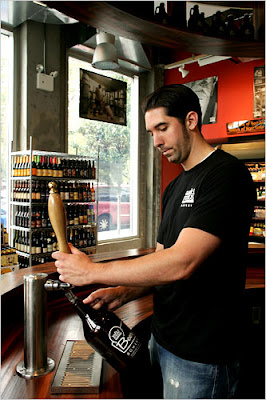 “There’s always the possibility that someone may not fill the growler properly,” said Shane Welch, founder of Sixpoint Craft Ales brewery in Brooklyn, which sells its products in stores in growler form. Most stores and bars run the beer straight from the tap to the bottle. “If you don’t fill it to the top, if you don’t purge the air out of there, when you close the container it will be stale beer,” Mr. Welch said. “You probably have to drink it that night.”

Mr. Granger, who says growlers constitute a large percentage of his sales, has tried to avoid that possibility. He has a system in which bottles are filled under pressure through a plastic hose to keep out oxygen. Filled that way, he said, they could stay fresh for months unopened, and three to five days when opened. 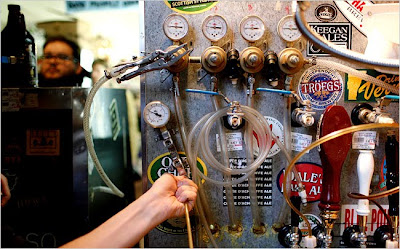 “Ergo, no flat beer,” he said. “No oxygen in the bottle, no foaming beer, no waste.”

No bar tab, either.

Brew by the Jug

Here are places in New York for growler lovers: