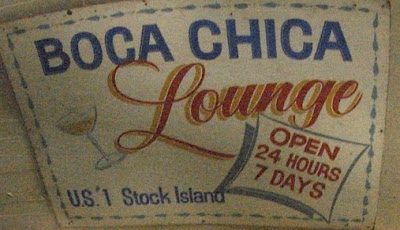 In a case of what surely must have been mistaken identity, that is someone mistaking Treasure for Trash, the vintage Boaca Chica Bar sign is missing from The Green Parrot. It appears to have vanished from a pile of other signs that were taken down from the bar’s ceiling for routine maintenance and were stacked on the deck next to the band house.

As we said someone must have mistakenly thought the sign was being tossed out and carried it home.
Any help at all would be greatly appreciated, the kids, as you can imagine, are heartbroken. 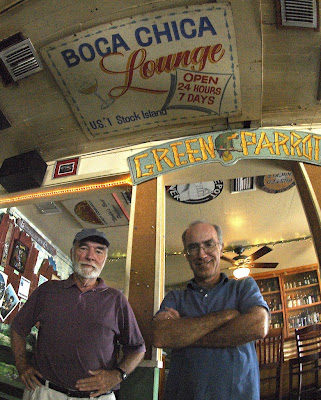 The Halloran brothers, former city commissioner George and brother Andrew, pictured below in happier times below the now-missing sign

One of the many vintage signs on the ceiling over the pool table, a Boot Hill of vanished Keys businesses, this sign was perhaps the one with most sentiment attached to it, not just for the notorious barroom the sign represented, but for the unlikely set of circumstances surrounding it’s delivery to the Parrot, both of which are described in a few paragraphs below.

Former Key West City Commissioner George Halloran had spotted the sign in a Havana, Cuba boatyard while he was having his boat hauled out there a twenty or so years ago. George managed to salvage the sign, which was being used at the time to keep a cuban boat mechanic’s head out of the dirt while he crawled around under some dry-docked vessel. George recognized the valuable piece of Key West memorobilia for what it was, proceeded to big-deal the guy out of it, and hand-delivered it to us at the Parrot where it hangs today. And for that George gets a beer on us whenever he walks in the door.
For those who don’t remember the Boca Chica Bar it was located right on US 1 in Stock Island that saw it’s hay-day in the seventies and eighties and was kind of like Stock Island’s own little Barbary Coast, rife with smugglers, hookers, cops-on- the-take,fisherman, gays, thieves, writers, musicians, the occasional slumming or over-dosed celebrity and pretty much everything in between. Unless you’ve spent some time in there or maybe even been woken up out front of the place in the bed of a pickup truck at 7 AM with the tropical sun blazing down on you it’s pretty hard to describe.
There is nothing in town today to compare it to. It was a cross section of a Key West that has all but vanished and could certainly never be recreated and put under one roof again (a scary proposition at best). The stage was wrapped in cyclone fencing like Bob’s Country Bunker in the Blues Brothers movie, the bartenders and the bouncers didn’t suffer fools gladly, and as the sign says, it was “Open 7 Days a Week, 24 Hours a Day” although the place didn’t really come into it’s own until 4 AM or later, when all bars in key west proper let out and all the not yet sated revelers poured over the Cow Key Channel bridge for a nightcap…or two. I believe Hunter S. Thompson made mention of it on occasion as the “soft underbelly of Key West”.
Anyway, thanks George, for thinking of us