I thought I’d  give a cultural snapshot of the next 30 or so days, beginning with The Green Parrot Ukulele Association monthly meeting on Wednesday, March 6, up to  Monday, April 1st: Smirk’s Birthday Party.
Ukulele Night, in its second year, has been a a ton of fun every month and shows no signs of ever being less fun.
If you have not been to one, do yourself a favor and stick your head in. There are smiles all around for 3-plus hours.
People walking by do a double take when they pass.
And what to say of Smirk‘s birthday: “they grow up so fast”.
So anyhow, that’s the beginning and the end.
In between there’s horn-heavy funk and cabaret-punk,  folk, rock, high-octane hillbilly and drum-driven world pop. 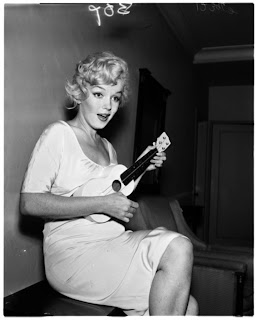 Green Parrot Ukulele Association Meeting on Wednesday, March 6
The March meeting of The Green Parrot Ukulele Association will be held on Wednesday, March 6, at 8 p.m. with co-hosts Jeff Clarke, Tim McAlpine and Jay Gewin.
Following the same format as the previous well-attended, high-spirited shindigs, the meeting will begin with a workshop at 8 p.m. for those just starting out on the instrument. Basic instruction and chord and song sheets will be provided. At 9 p.m., there will be featured performers, an open mic and a play-along, in no particular order.
For those who missed February’s meeting, it was outstanding, with an ever-growing congregation of uke-bearing aficionados in attendance, most of whom crowded the stage for a few nimble and professional sing-along covers of popular songs to wrap up an already lively night.
“It is obvious from last two month’s turnout that there is a serious Key West ukulele scene simmering just below the surface,” said John Vagnoni, Green Parrot manager. “We also see this as a unique way for Key Westers to meet people and make music at the same time.”
Dig out that old ukulele from your attic or closet and strum your way into a four-string stupor at Green Parrot Ukulele night, Key West’s only ukulele-powered jam session.
Come to just listen or join in. All levels are welcome and remember, spare ukes and instruction are available for those who want to try them out. 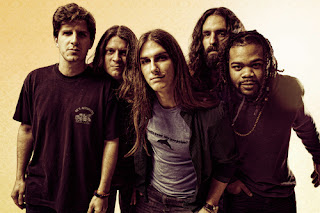 Spiritual Rez Brings Reggae Funk Horn Party to Parrot
The Boston-based reggae/funk/horn party Spiritual Rez hits the Parrot stage with shows at 5:30 and 10 p.m. on Friday, March 8, 10 p.m. on Saturday, March 9, and 5:30 p.m. on Sunday, March 10.
Spiritual Rez starts with a dose of old-school Marley-Toots-Tosh reggae and infuses it with everything from Sun Ra Arkestra freak jazz to Steve Vai guitar pyrotechnics. Parrot regulars will recall their inspired shows during last year’s Fantasy Fest weekend.
Inventive intersections like these define Spiritual Rez, who has tirelessly toured the country promoting positive music and attitude. The band has played with international acts like George Clinton and Parliament-Funkadelic and Toots and the Maytals.
Winners of the Boston Music Award for Best World Music Act and alumni of the prestigious Berklee College of Music, the band provides a unique blend of reggae, funk, Afrobeat and rock to give one of the most energetic live shows around, blending chill island grooves with raucous urban tribal vibes. 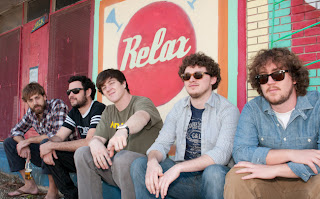 NOLA Quintet Earphunk Makes Green Parrot Debut
Up-and-coming New Orleans jam-funk band Earphunk will make their Green Parrot debut with shows on Wednesday, March 13 at 10 p.m., and Thursday, March 14, at 5:30 p.m. and 10 p.m.
Hailing from the Crescent City, Earphunk has emerged as one of the premier jam acts in the Southeast. The quintet has been steadily building a rabid fan base across the United States with their brand of high-energy funk, inspired improvisation and dynamic stage production.
Earphunk has performed in more than 40 cities over the past 12 months, including performances at Wakarusa Music Festival, Bear Creek Music Festival, and the Purple Hatters Ball, and has shared the stage with Galactic, Big Gigantic, Toubab Krewe, Ivan Neville’s Dumpstaphunk, Zoogma, Perpetual Groove and Big Sam’s Funky Nation. 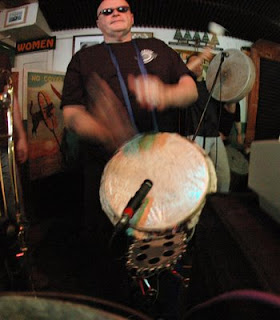 Entrain, Drum-Driven World-Pop Sensation Returns to Green Parrot
Entrain, the drum-driven world-pop sensation from Martha’s Vineyard, makes its long-awaited return to The Green Parrot with shows at 5:30 p.m. and 10 p.m. on Friday, March 15 and Saturday, March 15; and at 5:30 p.m. on Sunday, March 17.
Merging funk, rock, reggae, swamp, and world beat rhythms with a sweaty good time, Entrain has been praised for their ability to shift effortlessly between musical styles – from rock, Blues, calypso, zydeco, jazz and world beat – sometimes within the same song. Their concept is all about the synchronization of rhythms, and anything goes.
An Entrain show is a beautiful, tribal, positive, uplifting experience that shouldn’t be missed, shifting from funk to ska to African to Afro-Cuban to zydeco to folk rock – all with a groove so infectious that you have no choice but to dance.
The Green Parrot Bar is your “Southernmost Center for Culture of All Kinds” at the corner of Whitehead and Southard streets. For additional information call The Green Parrot at 305.294.6133. 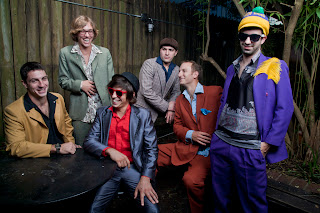 The NOLA-based six piece funk-rock band Flow Tribe will bring their dramatic, brassed-up brand of rock to The Green Parrot Bar this weekend with shows at 5:30 and 10 PM on Friday and Saturday, March 22nd and 23rd, and 5:30 p.m. on Sunday, March 24th.
All natives of New Orleans and founded in 2004, they are self-described as a “bizarrely irresistible unique blues/funk/rock band that electrifies the audience with the delicacy of a sledgehammer and a diversity of music that absorbs the crowd into the band and forms one funky orgy. Influenced by the eclectic New Orleans funk/rock community, Flow Tribe is a dynamic entity…that seeks to flip your switch, crack your backbone, and take any event into the 4th dimension.”

Fusing psychedelic/blues and funk/rock Flow Tribe considers themselves “a more irreverent version of Galactic that operates under the philosophy, take the music seriously, but don’t take yourself seriously.” 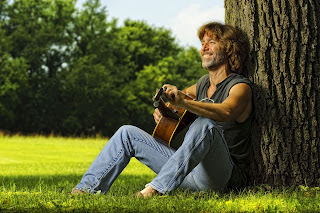 Singer/Songwriter John Flynn at The Parrot
Philadelphia-based singer songwriter John Flynn will appear at The Green Parrot bar on Tuesday, March 19th, beginning at 8 PM.
John sings from the heart. His powerful songs of humanity and hope are rooted in the traditions of Woody Guthrie & Phil Ochs. John paints vivid images with words and music drawn from a palette of awareness, compassion, irony, & humor. 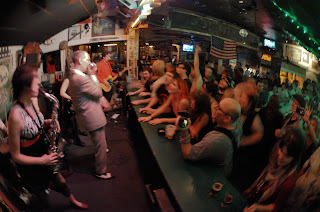 NYC’s disturbingly cult-like, circus-related, Halloween-tent-revival orchestra, The World/InfernoFriendship Society, returns to at The Green Parrot on Wednesday, March 20th, at 10 p.m.
The longstanding Brooklyn-based collective plays cabaret punk with a style that merges punk, soul, klezmer and jazz, while its collective membership features horns, piano and guitar. The ensemble has over 30 members with about up to nine or 10 members performing at a time. You’ll find the Society in full form, complete with tight horn arrangements, slinky piano, rockabilly-primed bass and guitar, and full-throated dual male-female vocals.
More than a rock band with a horn section, The World/Inferno Friendship Society seems to be a relic of a forgotten time; the group’s jubilant DIY ethic mixed with eclectic world music taste pays tribute to the old New York Moon Ska scene. Led by the dapper and strange Jack Terricloth, the band is a group of punks who like to dress nice, with a fashion sense located in that meeting point of mod, punk, rockabilly, swing kid and old-time Euro threads. But it’s not just a fashion statement that they want to make. Their music is sophisticated, impeccably arranged and dynamic. 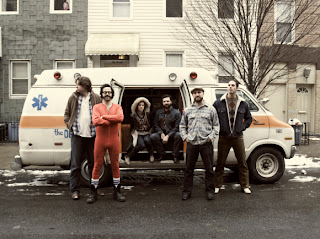 The Brooklyn-based barn-burners The Defibulators, an “alt.country band without the alt.” will bring their brand of woozy straight-up fiddle-driven Americana to The Green Parrot Bar on Thursday, March 21 with shows at 5:30 and 10 PM.
Likened to “watching Hee Haw on mescaline”, the Defibulators have been reinventing country music by fusing bluegrass, rockabilly, dixieland, and punk into their own eclectic sound for a new generation. This septet wields an arsenal of instruments (upright bass, banjo, fiddle, harmonica, Telecaster, and washboards) with relentless energy and virtuosity, to create their own eclectic indie, honly-tonk sound.
Bug Jennings and Erin Bru’s razor-sharp harmonies combined with dark, surreal lyrics illuminate songs that are gritty and witty. AM NY describes the band as “one of the most engaging live acts on the NYC roots scene.” While jumpstarting new life into vintage country, characterized by THE NEW YORKER as “Citibilly,” The Defibulators deliver a unique sound that is both timeless and timely, deep-fried and downtown.
Emerging as one of the most engaging live acts from the thriving roots scene in Brooklyn, the band has self-published their very own 24-page coloring book and tours the country in their 1977 Dodge ambulance.
“Roots-heavy, post-punk music that reinvents the conventions of country music
with a CBGB’s-meets-Grand Ole Opry feel.” -Crawdaddy 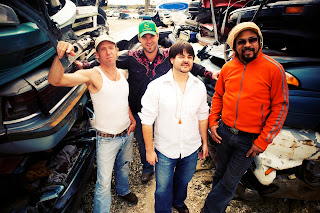 Honey Island Swamp Band  Puts NOLA Spin on Green Parrot
New Orleans-based  Island Swamp Band, recent recipients of two of the Crescent City’s prestigious Best of The Beat Awards for Best Emerging Artist and Best Blues Album will return to the Green Parrot with shows on Friday and Saturday, March 29th and 30th, beginning  at 5:30 and on Sunday, March 31st at 5:30 PM.  at 5:30 PM.

For most of the past decade, Aaron Wilkinson and Chris Mulé established themselves as top-notch musicians and songwriters, most notably as members of the Eric Lindell band.  Collaborations between all three musicians have been favorites of DJs in major US markets, internationally and on both Sirius and XM satellite stations over the past year.
After years of touring around the country and around the world in support of Lindell’s releases and with various other bands, Wilkinson and Mulé formed the Honey Island Swamp Band as a vehicle for a huge backlog of original songs the two had written but never recorded. The band came together in San Francisco, where both musicians were marooned after Hurricane Katrina devastated New Orleans. They have since become staples on The Green Parrot roster and never fail to please.

The Green Parrot Bar your Southernmost Center for Culture of All Kinds on the corner of Southard and Whitehead Street. For more information 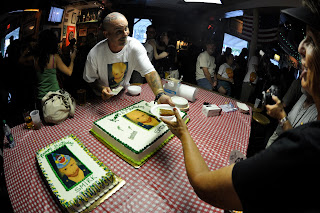 Monday, April 1, at 5 p.m., join well-wishers from near and far, past and present, to wish Green Parrot Icon “Smirk” a happy and healthy 38th birthday. They grow up so fast!
Yes, it’s been 38 years since that enigmatic countenance, that sphinx-like kisser, appeared on the plywood shutter on the Southard Street facade of The Green Parrot. Facing the barroom when the Parrot is open and facing the street when we are closed, Smirk has, as we say, “Seen it All.”
Inspired by an image from a National Geographic magazine, in the then-owners’ effort to dress the place up, Smirk leapt from the pallet of artist and former Green Parrot bartender Saul Paul Stewart in 1975 when amazingly, the only other things resembling art that adorned the Parrot’s walls was a rather grisly knock-off of the famous Karsh Hemingway portrait, also by Stewart, and an equally disturbing snow shovel with a few bullet holes in it.
To celebrate the occasion a prized re-issue of the Smirk T-shirt will be for sale along with Smirk Masks for what promises to be a most unusual, if not bizarre, group photo.