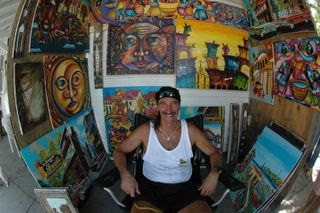 On Sunday, July 22nd , from noon to 7 PM, The Green Parrot will
host the latest of their “Off The Wall’ Sidewalk Art Shows.
Billed as a part of Hemingway Days, the purpose of the “Off The Wall”
SidewalkArt Show is to showcase local artists in particular and help
nurture art awareness in general.
Because of the Parrot’s sometimes willy-nilly method of curating
its’ eclectic collection of mostly “found” art objects, the
Whitehead Street saloon has long been known to locals as ‘The Home of
Great Drinks and Bad Art’.
Manager John Vagnoni says, “Hopefully these art shows, featuring the
work of some wonderful local artists will make The Parrot ‘The Home
of both Great Drinks, and Great Art’ and also help cement our
reputation as a Cultural Hub of the working class in Key West”.
“Cultural hub…are you kidding”, added night manager Pat Lonergan,
“This place has got more culture than my refrigerator.”
Represented at this year’s show on the sidewalk outside the
venerable gin mill will be, among others: David Klein and Roger
Doucette from Stone Soup Gallery, Creations in Bamboo by Madek and
Esther, woodworker Tom Avery and artists Malley Weaver, Rick Worth,
Bob Orlin, Caiman Martin-Smith and Will Fernandez
In addition Tony Gregory’s Art Attack will
feature the hand-made jewelry of Christine Scarcella plus whatever Tony
has created that day.
Also available for sale will be the work of those artists
currently displaying their work in Parrotphenalia, the Green Parrot
retail store, including Carrie Disrud, David Wegman, Katherine Doughty,
Louie Hughes, Donnie Speers and Bob Kennedy.
As a special attraction, in what has been the highlight of past shows,
the front yard of Parrotphenalia, the Green Parrot retail store will
be transformed into Jay Gogin’s Mud Pi Studio for a day, complete with
potter’s wheels where Jay and his assistant Jeff Gibbons will work
their Raku magic for all to see. Jay’s exhibition this year will also
include A “Pig-Off” pitting a whole roast pig from Jay’s Cuban Box
against porrk shoulders from The Big Green Egg of Richard Talmedge
from The Restaurant Store. A tasting will follow with all proceeds
from the pork
going to benefit the Key West High School Pro Start Culinary Program.
As if that weren’t enough for one Sunday afternoon there will be a
fundraiser to help new parents Tim and Lisa Grandy defray the expense
of new daughter Jacquelyn’s 6-week stay in a Miami Neo Natal Care
unit. Parrot employees have been scouring the island tirelessly for
weeks collecting prizes from local businesses to fuel the raffle said
Master of Ceremonies Joe Weed. There will be also be prizes, drink
specials and non-stop music from 2 til 7 PM featuring Soul Man Robert
Albury, Blues Rocker Caffeine Carl and firt-time Parrot appearances
fromThe Michael Dixon Band and Roots Rockers Butcher Hollow.

The Green Parrot Bar, located on the corner of Southard and
Whitehead streets is your Southernmost Center for Culture of All
Kinds. Says Vicki Roush, “The Green Parrot Bar, maybe it’s not for the
cultural elite, but it’s certainly for
the culturally deprived.”
For additional information call 294-6133.