From The Key West Citizen
50 YEARS AGO
The Brown Derby Bar, an air-conditioned sailor’s bar managed by Gladys M. Burgert, was at 601 Whitehead St.

Submarine sailors still come in from time to time, and ask “whatever happened to Gladys?” She must have been something special. 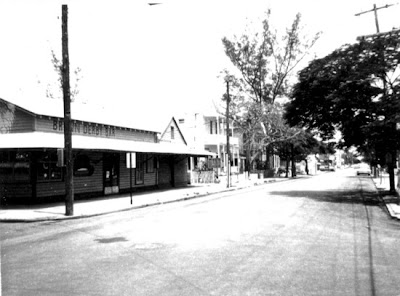 That photo got me to thinking of other Key West Bars from the past and I found this list on a Key West Conchs web site. Check out the link here.

Key West Bars
This list does not include illegal Beer and Wine drinking grocery stores and pool halls and predominantly restaurants which also serve alcoholic beverages scattered around the City.

On the corner of Front and Whitehead Sts. was the “Silver Dollar Bar”

On the southeast corner of Whitehead and Southard Sts. is the “Green Parrot” formerly “The Brown Derby”.

On the 300 block of Southard St. was the “Gate Bar”, then in later years it became an exotic dancing, female wrestling bar. I don’t know the name of the place.

On the NE corner of Greene and Simonton Sts. was “The Midget Bar”.

On the 500 block of United St. was the “The Wrecker’s Lounge”

On the 1400 block of Simonton St., SW corner, was “The Atlantic Shores Bar”, later called “Papillion”.

On the 1400 block of Simonton St. was Logan’s, then became at strip club called “The Edge”.

On the 800 block of Caroline St., south east corner was “The Bucket of Blood”, later called “The Wagon Wheel”, later caled “The Red Doors Inn”.

On the SW corner of Grinnell and James Sts. was “Johnny’s Swinging Doors”.

On the 500 block of Margaret St., west side, was “Blackwell’s”, later remodeled and named “Compass Rose”.

On the NE corner of Truman Ave. and Packer St. was “The Drum Bar”.

On the south side of Truman Ave. and Grinnell Sts, were the two different locations of “Che-Che’s Bar”

Later in the same block, “The White Inn” moved across the street. Later became “Big Daddy’s”, then a male strip club, and “Teasers”, a female strip club.

On the SW corner of Flager Ave. and Bertha St. was, and maybe still is “The Tides Inn”.

On the SE corner of Flagler Ave. and Bertha St. was “Chino’s Bar”, later “The Staircase Lounge”.

On the 1800 block of N. Roosevelt Blvd, south side, there was “Chino’s” after they sold the one on Flagler Ave.

On the 3300 block of Duck Ave, south side, was and maybe still is the “Poinciana Lounge”. Before that is was a variety store run by Bill Chappel.

On Stock Island, south side, you first came to “The Boca Chica Bar”, then “Weaver’s Bar”.

Further east on US 1 and MacDonald Ave. was “Wylk’s”, a female strip club; later “The Green Lantern Inn”.

Further east on US 1, south side was or is “Ikie’s”.
“Free Beer Tomorrow”.

At the end of Maloney Ave. on S.I. was a little wooden building built on a wooden dock, called “The Pier”.

Across from the Dog track was “Sug and Yales”, later, “The Rusty Anchor”.

In the 300 block of Duval on the east side was “The Tradewinds” It burned down and that’s where “Gulf Life” was built.

In the 100 block of Duval was “The Mardi Gras Club”, and
around the corner on Front Street north side was “The Habana Madrid”.

In the 400 block of Greene St. south side was the original “Sloppy Joe’s”, later called “The Blind Pig”; later called the “Duval Club”; later called “Capatain Tony’s”.
On the corner of Greene and Fitzgerald Sts. was “The 116 Club”, later became “The Rose Garden”.

That’s about all I can think of. If I missed any, sorry.