“Yes, they’ve landed. There is no runnin, hidin, cryin, or tryin to
change your fate.” 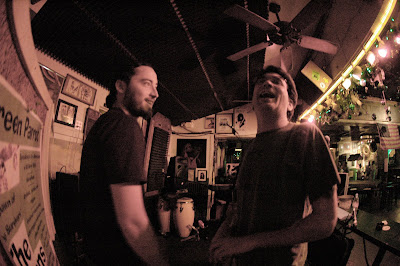 Allien Zeph (left) atttempts to turn Pat (right)into a pod person but it appears The Brotherman, scoffing, is having none of it.

With shows scheduled at 5:30 P.M.Sunday, December 21st, and 9:00 P.M Monday and Tuesday, December 22nd and 23rd, The Alliens land and
make their much anticipated return to The Green Parrot.
The Alliens are the Spawn of Woody and Din Allen, two of the founding
members of the Survivors,the legendary Key West quintet, who, playing
jazz, reggae, and calypso blends have been a fixture in the
alternative-lifestyle culture in Key West since 1977.
Survivors’ singer and guitarist Din Allen is father of The Alliens’
percussionist Janiah and Alliens’ keyboardist & trumpeter Jamiel,
while Survivors’ multi-instrumentalist Woody Allen is Alliens’
guitarist Zeph’s father.
Specializing in the Abduction of All Motor Skills, World-funk is one
way to define the Alliens. You won’t walk away from an Alliens show
without hearing Afrobeat, cumbia and reggae being bounced around
inspired rock jamming, in the latin-reggae-funk-fusion style called
Allienation.
Most of all, expect the desire to dance and if symptoms persist, you
have officially been Allienated.
The Green Parrot Bar is your Southernmost Center for Alien Abductions
of All Kinds at
the corner of Whitehead and Southard Streets. For additional
information call The Green Parrot at 294-6133.