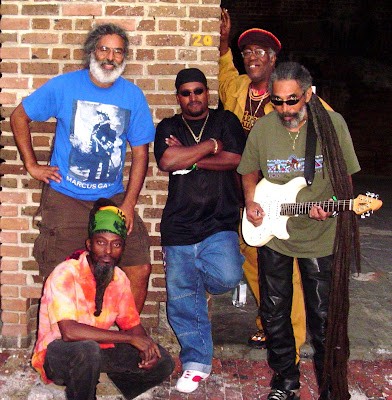 Over the past year Techno Dread has been through several challenges
and changes but there can be no growth without change. Techno Dread is
the brain child of Tony Gits. He has kept his original vision alive
and has nurtured the concept of Techno Dread. Although many musicians
have come and gone, the musical direction and main focus of Techno
Dread has remained strong due to the unwaivering determination of Tony
Gits. Original Reggae music of a high standard and with an
international appeal has always been his aim. Techno Dread is alive
and well, kept safe in the arms of Tony.

Tony was born in Kingston, Jamaica, the Reggae capital of the world.
He is recognized as a talented actor, composer, producer, arranger,
guitarist, vocalist, and percussionist. Powered by his Rastafarian
faith Tony relocated to Canada in 1975 while touring as vocalist and
percussionist with the internationally known Ernie Smith and his band
Roots Revival. Tony later became one of the founding members of the
Reggae group “BLOOD FIRE” which performed at Reggae Sunsplash in
Jamaica in 1982.
They have played with most, if not all, of the better Reggae artists
of international stature.
The Green Parrot Bar is your Southernmost Center for Reggae Culture,
at the corner of Southard and Whitehead Streets.
For more information, call 294-133.