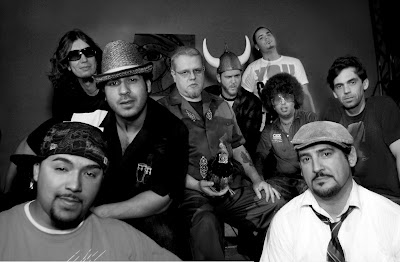 Suenalo, the Miami-based 10-piece Afro-Latin-funk-jam band
explodes on to The Green Parrot Stage with its polyrhythmic display of
funk, mambo, hip-hop, and jam-band-style on Friday,
Saturday and Sunday, May 28th, 29th, and 30th with shows beginning at 10 P.M.
Green Parrot patrons will be dancing, twisting and shouting for two
pelvis-grinding nights as Suenalo brings a their 10-piece funk /
afro-beat / jam band to the Parrot stage.
Any Parrot patron present for Suenalo’s past Parrot shows will remember a barrage of
music that’s simultaneously Afro-Cuban, Dominican hip-hop, R&B,
Latin-Funk, Cuban Rhumba, and Colombian Cumbia.
Suenalo promises to have Parrot dancers on their feet till the wee hours.

Created in 2002 in the vibrant neighborhood of Little Havana, Suénalo
has won legions of loyal fans and recently garnered Best Local Latin
Rock Band honors from the Miami New Times where they were dubbed as the source of Miami’s best new spin on
rock, Latin or otherwise.
The group’s 10 members form a multicultural
cocktail, a crashing wave of African beats, reggae, dancehall, and samba that makesSuenalo one of the most eclectic bands to emerge from Miami in years.
A true musical melting pot, Lead singer Amin DeJesus is Miami-Dominican. Drummer and singer Fabio Patiño is Mexican; conga player Alan Ramos is Puerto Rican; keyboardist Tony Laurencio and sax player Juan Turros are Miami Cubans; guitarist Gerard Glecer is Massachusetts French.. Chicago’s man in Suenalo is trombonist Chad Bernstein. Other cities, states, and nations may not have a guy in his band, but they are there in spirit: The ensemble employs rhythms from Brazil to Jamaica, including samba, cumbia, rumba, son, hip-hop,and reggae mainly focusing on fusing Afro-beat and Latin rhythms with funk and rhythm and blues.
Melded with horns and gyrating, wah wah-peddled guitars Suénalo’s
celebratory jam session becomes an addictive fusion of Afro-Latino
rhythms and American funk that makes one jump in joyful praise.

Astute Parrot regulars will recognize Suenalo’s trombone player, Chad
Berstein, as the conch shell virtuoso/trombone player in the Spam
Allstars’ horn section when they blew the doors off the place on their last Parrot gig.
The Green Parrot Bar is your Southernmost Center for Culture of All
Kinds, at the corner

of Whitehead and Southard Streets. For additional information call The
Green Parrot at 294-6133.