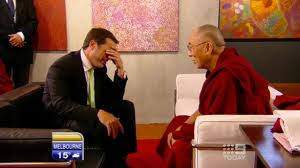 An Australian television presenter attempted to tell a Dalai Lama joke to the man himself, but struggled to raise a smile.

Karl Stefanovic from the Today show had to have elements of the joke translated to the Tibetan leader, and the play on words were met with a blank stare until the Dalai Lama laughed at Mr Stefanovic’s attempts to explain the humour.

Watch as the the joke backfires