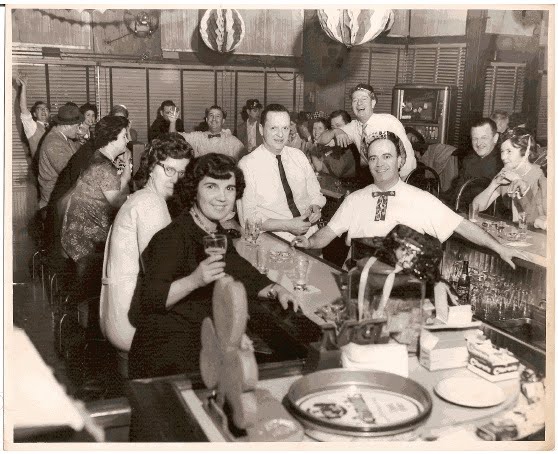 Another St. Patrick’s Day at The Green Parrot.

With that in mind, here’s a shot of a St.Patrick’s Day that’s long gone. This photo was taken either in 1956 or 1957 at Sharkey’s Tavern, my father’s bar, outside Philadelphia. 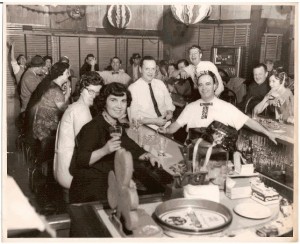 In the foreground, behind the bar, sporting a broad grin, a Hibernian string tie, and some sort of cellophane party hat, is my father, Al.

To his right is long-time bartender Bill Conaboy, and behind Bill, wearing the bow tie, is my father’s partner and brother-in-law, Jimmy Ranalli. Jimmy’s wife, my dad’s sister, my Aunt Emma, is in the foreground, looking very youthful and also with a great smile, hoisting what looks to be a glass of beer.

I don’t see my mom in the picture, although all the way in the back on the left, gesticulating wildly, is my uncle Dick, seated next to his wife, my mother’s sister, My Aunt Rita. (Aunt Rita,I might add, paid us a visit recently and so was perched on a Green Parrot bar stool, a few years back, a day after celebrating her 88th birthday. 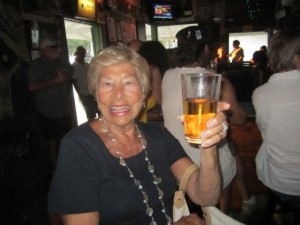 Rita in the Parrot.
That could be my mom, obscured, sitting next to Rita, but more likely she was in the kitchen in the back tending to the ham and cabbage, which I seem to recall was the traditional Sharkey’s St.Patty’s Day fare.
Looking at Dick, I keep thinking that if this were a movie instead of a still shot, the next few frames would show Dick in his excitement doing a backflip off his barstool. I hasten to add that I know for a fact that Uncle Dick’s off-balance appearance was generated more by his innocent enthusiasm for a photo-op than any over-indulgence in adult beverages. Sharkey’s was, as you can see, a family affair, and despite Emma’s beer and Dick’s posture, there never was a more temperate extended family. I don’t know who the big guy in the middle is, but you gotta love it.
It’s funny the things that strike you when looking at old family photos. What jumped out at me in this photo, besides Al’s tie of course, and Emma’s smile, was the cigarette machine way in the back on the right. I remember, as a small child, on some Sunday mornings, when the bar was closed, my brother and I would go there with my father and one of our jobs was to stock the cigarette machine. And part of that job was to tape two pennies on the side of every pack of cigarettes. Cigarettes cost 28 cents but since the machine did not accept pennies, customers could deposit a quarter and a nickel and get their change back taped to the side of the pack. I remember scotch-taping those pennies on, and I remember sliding each pack down the trough, down the length of the bar to my brother to be loaded in the machine.
On that nostalgic note, Happy St.Patrick’s Day from all of us at The Green Parrot Family.