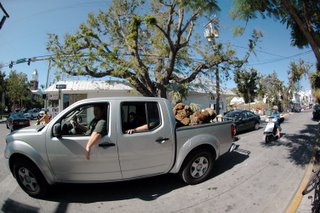 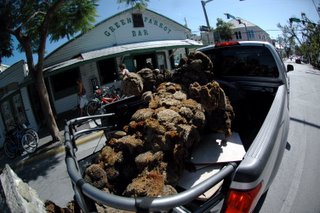 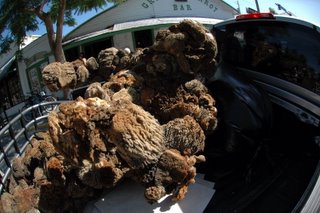 This one certainly needs a a little set up.
When I first looked out the front door of the parrot I saw my old friend Greg, of the Key West Aquarium, at the wheel of a pick up stopped at the light. As I approached the truck to say hello to Greg my gaze fell on the bed of the truck and it’s macabre cargo.
None other than The SpongeMan, a larger than life creation made entirely of Key West Sponges that resembled nothing if not James Arness in his film role as The Thing in the 1954 Horror Classic of the same name.
I had first seen SpongeMan some thirty years earlier displayed in the window of a Key West Printing company (why I have no clue) on the corner of Simonton and Fleming Streets where the Duck and Dolphin antique shop is today.
Although this never happened to me personally, I had the heard stories of some hapless souls who, back in the seventies, while under the influence of various psychedelia and while caught unawares, had paused inadvertantly at this window and as their gaze drifted upward and fixed on this seemingly soulless yet extremely absorbent creature, they would freeze in terror, and once they regained some form of locomotion, they hauled their sorry-assed hippie bones back to their madras print-curtained, candle-lit, ratty apartments before, they feared, they would disappear down the rabbit hole altogether.
Where he’d been since I’m not quite sure. In Ed Swift’s attic perhaps. Greg said he was to be given a tune-up at some undisclosed location, but it just goes to show you never know what you’ll run into when you step out of the relative safety of the parrot. As Martin Sheen once wisely said, “Don’t get off the boat”