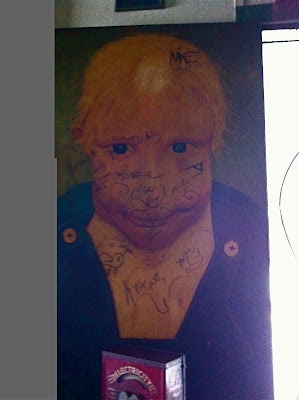 Saturday evening  Smirk, arguably the most widely recognized and beloved face of The Parrot was defaced by cultural terrorists.
Apparantly using  Sharpies comandeered from a nearby table where the Conch Republic Foster Childrens Fund had set up shop for a fundraiser, two still-to-be-identified women handed the Sharpies out to unwitting tourists crowded in the bar beneath Smirk.
Using  clueless  tourists as their agents, the two women prodded folks to get in on the fun, and assured them that it was an acceptable Green Parrot tradition.
In an instant the damage was done.
For the first time in his 37 years, Smirk had been bombed.
Although a few of the taggers were identified and detained, police determined that the real culprits in this tragedy were the two women who instigated the attack and subsequently slipped away, and not the guileless foils who bought into the plan, shitheads though they were. 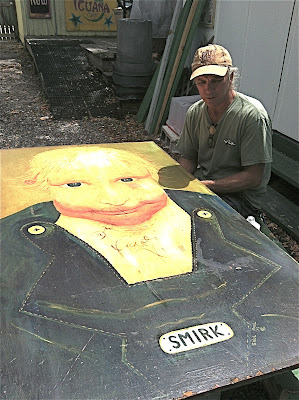 By Sunday morning thoughts of reprisal had shifted to thoughts of restoration.
Before the bar had even opened, Buco had taken the shutter down and was carefully planning Smirk’s restoraration.
For Buco, The Sistine Chapel derserved no less attention.
Slowly and with great deliberation he began to remove all offending monograms. 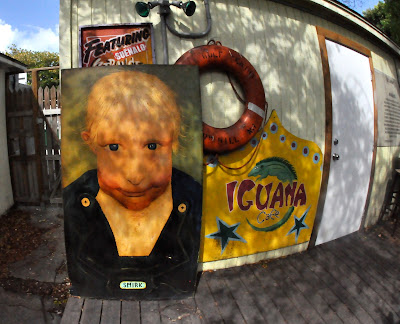 By late afternoon the painstaking procedure was completed and Smirk was resting comfortably in the dappled shade of a gumbo limbo tree out back. 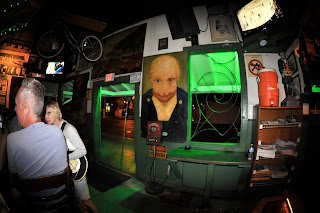 After Sunday soundcheck, when the crowd had thinned, and less than twenty-four hours after the desecration,  Buco had hung him back up, looking none the worse for wear.
The take-away for me here seems to be that no matter how hard we try to control everything, we cannot.
So the lesson learned is rooted not so much in events that happen to us but rather how we respond to those events.


I was impresessed by the intensity and sheer volume of the response our patrons showed both in person and online.


The the outpouring of support and the understandable anger (facebook comments were of the pitchfork-and-torch variety) from Parrot patrons everywhere is appreciated.


Also to our credit  was the staff reaction following the incident. All the suspects were treated respectfully, again, shitheads though they were.


Thanks to everyone for your heartfelt response.


And thanks of course to Buco who once again stepped into the breech unhesitatingly and made things right.  As I overhead Will, one of our  regulars, say, “If I ever have kindey failure, I’m callin’ Buco”.