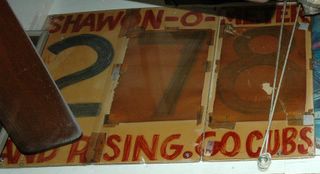 More from the Sports Wall…get ready for this one ..this is one of the two original SHAWON-O-METERS, this was the road version. We hear the home-field version is in Cooperstown.
It arrived unceremoniously and anonymously via Parcel Post one morning just as the bar was opening.
We found out later it was sent to us under the auspices of two Chicago radio broadcasters who, having been recent patrons of the Parrot, were impressed with the fierce loyalty displayed by the long-suffering Cub fans present in this remote enclave of Cubbie enthusiasts.
The parcel was opened by Jimbo, the janitor at the time, himself a huge Cub fan. He immediatly recognized the cardboard triptych for what it was, having seen it draped over the front of some box seats or off an upper deck facade in some major league ball park many times on TV.
Stunned, he pitched forward into kind of a double-time, back and forth Grouch Marx ramble up and down the sidewalk in front of the bar, cradling his head with both hands before dropping to his knees like he had just been bestowed a piece of The True Cross. And hey, who could blame him, he was A Fan.