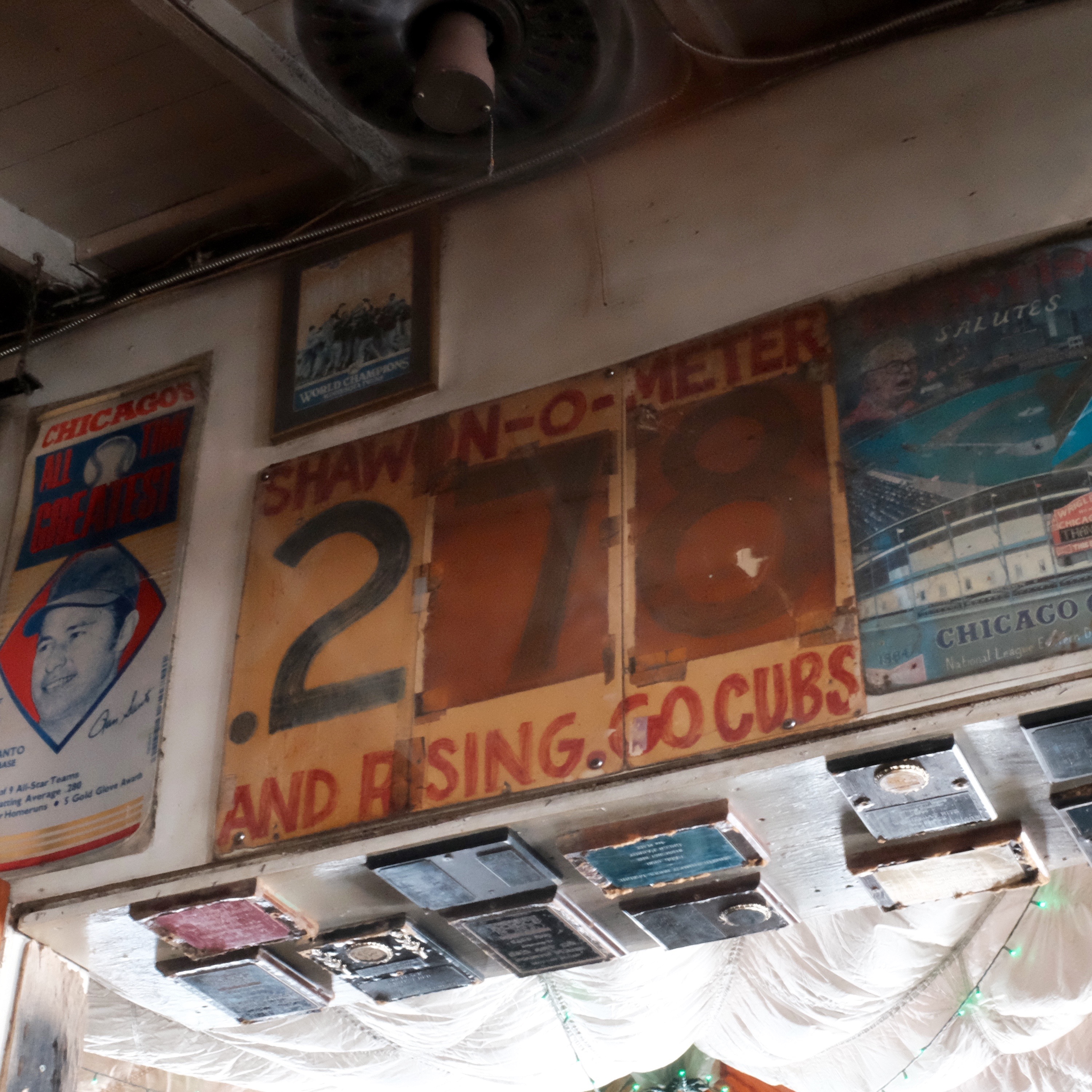 As the snake-bitten Chicago Cubs franchise prepares to take the field today and even-up their NLCS series with The Dodgers, overcome 108 years of failure, and mercifully end the longest World Series drought in MLB history, I thought it timely to again examine the Cubbies section of our Green Parrot Sports Wall, particularly the centerpiece,  an original, authentic  SHAWON-O-METER

First, a bit on the provenance of this particular, and very special piece of Parrot ephemera,  and then some history of Shawon-o-meters in general.

Our bit of MLB history arrived,  unceremoniously, and anonymously, via Parcel Post, one morning in 1989,  just as we were opening the doors for the day.
Addressed to no one in particular, the parcel was opened appropriteley enough, by our janitor, Jimbo,  who at the time doubled as our resident curator and trash-picker, and, was more fittingly, was  a huge Cub fan.

Jimbo instantly recognized the cardboard triptych for what it was, having seen them many times in recent seasons, either draped over the front of some box-seats or hanging off an upper deck facade in some major league ball park.

Stunned at the sight, as a fan, and totally unprepared for such a gift, as our curator,  Jimbo pitched forward and lurched into a kind of a hunched-over,  Grouch Marx ramble up and down the sidewalk in front of the bar, cradling his head with both hands until finally dropping to his knees, prosteletyzed,  as if he had just been bestowed a piece of The True Cross. And hey, who could blame him, he was A Fan.

We found out later the treasured artifact was sent to us by a pair of  Chicago radio broadcasters who, having been recent patrons of the Parrot, were greatly impressed with the fierce loyalty displayed by our long-suffering Green Parrot Cub fans, nurtured by recently  made-available Cubs broadcasts on WGN to our remote enclave of die-hard Cubbie enthusiasts.

Cub fan Dave Cihla and his bleacher buddies were brainstorming on creating a sign to get airtime at Wrigley. Rifle-armed Cubs shortstop Shawon Dunston had just gotten his average above .200 the day before and there was a blurb in the paper about pitcher Rick Sutcliffe getting the entire team to sign a ball for Shawon to mark the occasion. Dave thought, “How ’bout a Shawon-O-Meter?”

The first Shawon-O-Meter was makeshift placard displaying the batting average of  the Cubs shortstop followed by the words “And rising!!!”and was displayed in the left field bleachers of Wrigley Field in a game against the New York Mets on June 5, 1989.

From that initial series in June of 1989 the Shawon-O-Meter followed the Cubs shortstop through the nineties, as Dunston was traded to San Francisco in 1995 and then back to the Cubs for the 1996 season.
Hall of Fame Cubs broadcaster Harry Carey featured the meter in all of his broadcasts, and without his enthusiasm it would not have had the legs it did.

It was a unique sign, changing daily, and it helped that Shawon went from .203 at the start to an ending 1989 average of .278,  but I think the real beauty of the meter was that the stewards of it were just ordinary fans, bleacher bums that felt honored to be part of it’s journey and had great fun letting other fans hold up the meter and share the excitement.

Other original versions of the Shawon-O-Meter currently reside in the archives of The Baseball Hall of Fame in Cooperstown and Chicago History Museum, which puts us in pretty good company.
http://versatilehuman.com/som/