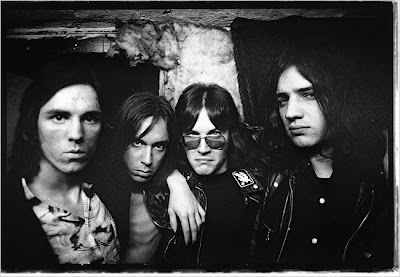 Ron Asheton, in glasses, with other Stooges members in 1972, from left, James Williamson, Iggy Pop and Scott Asheton.

By BEN RATLIFF
Published: January 8, 2009
Ron Asheton, a guitarist of the Michigan proto-punk band the Stooges, and the guiding hand of some of the most simple, satisfying and copied riffs in rock ’n’ roll, including “TV Eye,” “Down on the Street” and “I Wanna Be Your Dog,” was found dead on Tuesday at his home in Ann Arbor, Mich. He was 60.

Police officers found his body after a friend alerted them that Mr. Asheton had not been seen for several days, said the Stooges’ publicist, Angelica Cob-Baehler. A coroner’s report from the Washtenaw County Medical Examiner’s office was not yet available; Sgt. Brad Hill of the Ann Arbor police department said that foul play was not suspected.

Mr. Asheton, whose friendly if sardonic personality seemed the opposite of his loud and dirty guitar playing, lived in the house he had originally moved to with his family in 1963, and where the Stooges had their first basement rehearsals.

Three high school friends in Ann Arbor — Mr. Asheton; his drummer brother, Scott; and the singer James Osterberg, who later changed his name to Iggy Pop — formed the nucleus of what was first called the Psychedelic Stooges. Influenced by free jazz, garage rock and Chicago blues, the Stooges’ first two albums — “The Stooges” and “Fun House” — are the best showcase of Mr. Asheton’s sound: two- or three-chord riffs with an open, droning, low E string and solos filtered through distortion and wah-wah pedals.

After the high point of “Fun House,” things became more complicated. The bassist, Dave Alexander, was fired, and the band was dropped by its label, Elektra. Iggy Pop, individually, was signed by David Bowie’s production company, MainMan. A new guitarist and songwriter, James Williamson, joined the group. On “Raw Power,” the band’s final studio album, Mr. Asheton was demoted to playing bass.

The Stooges lasted from 1967 to 1974. Having progressed from a noisy, anarchic joke to a great, confrontational rock band and back to a joke, the members were broke and addicted to heroin, except for Mr. Asheton, who increasingly took responsibility for holding the band together from day to day.

In 2003, after the Stooges’ music had become enshrined by the punk movement that followed, and more than 20 years since Iggy Pop and Mr. Asheton had seen each other, the band reunited. From then until last year, it played nearly 150 furious, quickening, age-defying concerts around the world, from Detroit to Moscow, and recorded a new album, “The Weirdness” (2007).

Between stretches with the Stooges, Mr. Asheton played with a number of bands in Los Angeles and Michigan, including The New Order (not to be confused with the British group New Order), Destroy All Monsters, Dark Carnival and the Wylde Rattz. Wylde Rattz was a collaboration with some prominent younger musicians — Thurston Moore of Sonic Youth, J. Mascis of Dinosaur Jr., Mike Watt of the Minutemen and Mark Arm of Mudhoney — who had grown up learning the songs Mr. Asheton wrote with the Stooges.

In addition to his brother Scott, Mr. Asheton is survived by a sister, Kathy.

Pursuing a lifelong interest in films, Mr. Asheton played small roles in several 1990s horror films, including “Mosquito,” “Legion of the Night” and “Frostbiter.” In 2008 he created a signature electric guitar for the Reverend company.

“For all that knew him behind the facade of Mr. Cool and Quirky,” read a statement issued by the Stooges, “he was a kind-hearted, genuine, warm person who always believed that people meant well even if they did not.”