Our old friend and Bluesman Roger Wilson sent us these great snapshots taken last month in New York City while on the East Coast leg of his national tour.
Based in Atlanta, Roger has been frequent visitor to the Green Parrot stage for the past ten years.
The first shot shows Roger obviously enjoying a jam session with none other than the inventor of the electric guitar himself, the legendary Les Paul. Les, although into his 90’s still gigs regularly in the New York area.
The next photo is Roger visiting with another legend, 60 Minutes’ little old “whine maker” Andy Rooney in Andy’s CBS offices in Manhattan. Before hitting the blues circuit full time Roger spent many years as a newshound with Ted Turner’s fledgling CNN network. We thank Roger for keeping us up on his travels and look forward to seeing him at The Parrot in February. 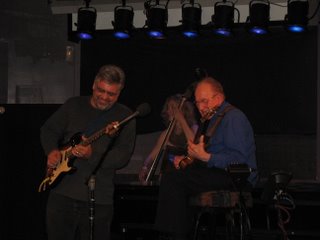 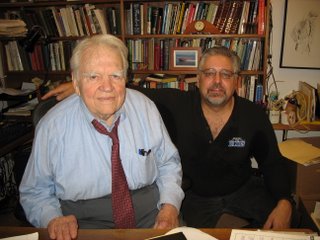