“It Ain’t Nothin’ But A Party” declares Vernon at the start of Rockin’ Jake’s “5 O’clock Breakfast” last New Year’s Day. 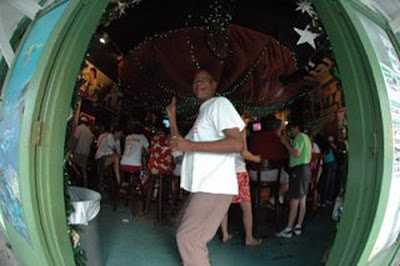 Rockin’ Jake Band Thunders in to The Green Parrot
“It Ain’t Nothin’ But A Party!”
The Green Parrot Bar brings back New Orleans’ Rockin’ Jake and The
Rockin’ Jake Blues Band, laying down some hot, funky blues harmonica,
for two rockin’ nights, Thursday,Friday and Saturday, May 24th, 25th and 26th beginning
at 10pm, with 5:30 P.M. “soundchecks” on Friday and Saturday.
Famous for his New Year’s Eve appearances at the Parrot, Jake says,
“Every night at The Green Parrot is like New Year’s Eve!” It should
be nothing short of one wild, raucous, musical celebration. 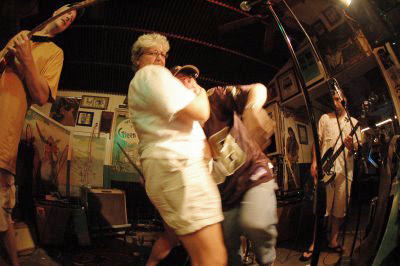 Here Vicki Roush joins Jake on stage for a memorable duet on New Year’s Day.
As luck would have it Vicki will be heading to St. Louis just as Jake is leaving St. Louis this weekend. Too bad, no duets this time.

The RJB’s sound results from an exciting blend of styles including
New Orleans funk and R&B, traditional and contemporary Blues, Jazz,
Zydeco, and Rock. The band has served as the backing unit for Blues
and R&B stars such as Billy Boy Arnold, Guitar Slim, Jr., Tab Benoit,
and poet John Sinclair. The RJB has been called upon to be the opening
act for Dr. John, Junior Walker and the All-Stars, Branford Marsalis,
and The Neville Brothers. Jake was the winner of the New Orleans Music
Industry Award for Best Blues Harmonica and was named New Orleans’ best harmonica player five times by Offbeat Magazine..
The Green Parrot Bar, your Southernmost Center for Culture, at the
corner of Whitehead and Southard Streets.
For additional information call The Green Parrot at 294-6133.