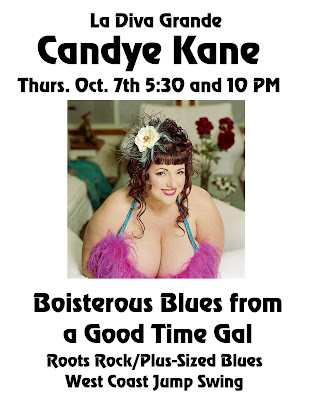 The island is buzzing with the news of Candye Kane’s return to The
Green Parrot Thursday, October 7th,with shows at 5:20 and10 P.M..

And what a swingin’ CD it is. But Candye is at her very best live and
in all her glory. Candye has made her mark here over the years, and
nobody’s forgotten. Kanes’ live shows are the stuff of legend. She honors the bold blues women of the past with both feet firmly planted in the present. Nominated for a 2008 National Blues Foundation Award for Best Blues Contemporary Female (the highest honor for blues artists) and beating down pancreatic cancer the same year, Kane is one tough cookie.
She belts – growls – shouts – croons and moans from a lifetime of suffering and overcoming obstacles. She uses music as therapy and often writes and chooses material with positive affirmations that leave the audience feeling healed and exhilarated.
A show that is part humor, revival meeting and sexuality celebration, she’ll deliver a barrelhouse-tongue-in-cheek blues tune or a gospel ballad like Jesus and Mohammed, encouraging audiences to leave behind religious intolerance. She’ll slay the crowd with her balls out rendition of Whole Lotta Love or glorify the virtues of zaftig women with 200 pounds of fun. She often says she is a “fat black drag queen trapped in a white woman’s body” and she dresses the part. Bedecked in bright colored feathers, sequins and rhinestones, Kane’s performance is Mississippi by way of Las Vegas with a quick stopover in San Francisco.

Her credits include TV appearances on Roseanne, Penn & Teller’s Sin
City, and on HBO, and is featured on the House Of Blues label release,
“30 Essential Women Of The Blues,” alongside such luminaries as Bessie
Smith, Alberta Hunter and Etta James.
Candye Kane is a multi-talented singer, songwriter, and musician, but
her many facets don’t end there; she is a devoted mother, a political
activist, a sexual libertine, student, actress, lecturer….the list
goes on. A true Renaissance woman and a plus-size voluptuary, her
eclectic career has spanned more than a decade, and she has made her
mark in quite a few areas. But her true talent, her undeniable gift,
is her voice.
Candye’s voice is awesome; or rather awe-inspiring. Like an amazing
sunset, or a volcanic eruption, The Grand Canyon or the huge primeval
Redwood forests, her voice is a natural wonder, something that cannot
be learned or faked. There are hints of Etta James, Big Mama
Thornton, Wanda Jackson and Patsy Cline, to be sure, both the sheer
power and volume are Candye’s alone, and her innate sense of phrasing
and intonation make her voice unique. From raunchy blues to
wrist-slashing country ballads, from slinky be-bop influenced numbers
to western swing, she has a natural command that can transcend any
style.
The Green Parrot is thrilled to welcome Candye back. It’s an event
worth planning your week around. For additional information call The
Green Parrot at 294-6133.