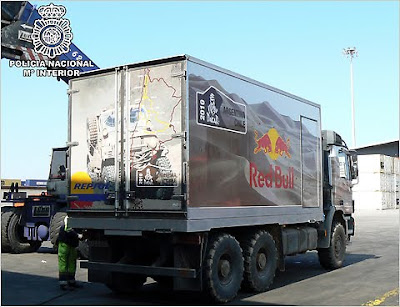 The Spanish police have stopped what appears to have been a daring strategy by an enterprising band of drug smugglers, who the police say tried to use the Dakar Rally in January to cover up their tracks.
Agence France-Presse reported that the smugglers disguised a truck to look like a race support vehicle for the rally, which was moved to South America from Africa last year. Photos provided by the police show a silver truck with logos for Red Bull and the Dakar Rally on its side panels and a graphic of a racecar on the rear doors.
“The vehicle had been totally transformed to adapt it to its supposed participation in the competition as a support truck, with publicity and logos of the event painted on its side,” the Spanish police said in a statement.
The police said the suspects had shipped the truck from Bilbao, Spain, to Argentina for the race. About 60 miles outside Buenos Aires, they were said to have pulled over at a farm and loaded up the truck’s 32 false bottoms with more than 800 kilograms of cocaine, which was covered in lead casings. BBC News reported that the truck then followed the two-week race to its conclusion before being shipped back to Bilbao. It was seized by the police at the port on Friday.
Also seized were 15,000 tablets of ecstasy, 10 pounds of hashish, two guns and about $64,000 in cash, the police said. Seven Spaniards were arrested.
The truck contained more than 800 kilograms of cocaine.
“The drug trafficking ring even provided the vehicle with all the necessary technical and logistical material, including the official uniform of the competition,” the police said. 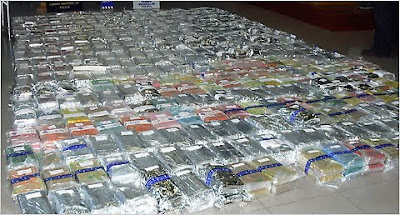 But according to the rally organizers, the truck was never part of the official race.
“The truck never came to a bivouac,” Emilie Poucan, a spokeswoman for the Dakar Rally, said in an email message, referring to the meeting point for race competitors and their support vehicles.
Ms. Poucan also said the graphics on the truck were not quite right.
“I’ve seen the pictures and they made a mistake by using the Dakar logo while the competitors (and their assistance) have their own ‘Dakar competitor’s’ logo to use,” she said. “And they didn’t have a race (or assistance) number either so we would never have let them enter.”