I got word of Duke’s passing through a phone message at the bar yesterday. I passed the news on to Captain Conch who sent me a photo and a brief, but near-perfect eulogy, Thanks, Bruce 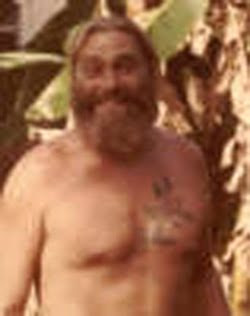 Duke Randall, one of the island characters from the pirate days of Key West is dead. Later on he moved to the woods in Big Pine Key. This picture of Duke is from about 1978. He looks a little high. He was named after John Wayne, “The Duke”. Duke was a great guy and had more stories than Aesop. After leaving the Keys he lived in South Carolina and was Fat Frankie’s all-purpose man at Frankie’s titty bar just outside the Charleston Navy base gate. I wish I could tell all the Duke stories, but I don’t know if any one could handle it.