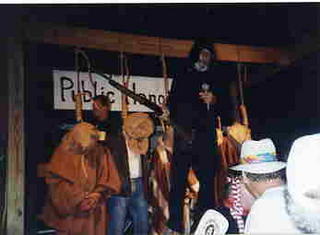 Here’s another photo of the boys on Halloween night.
On this night, before the halloween party even began a ten-foot high trailer was rolled up outside of the front door of the bar and there it sat there till near midnite, mysteriously shrouded completely in black plastic.
At the bewitching hour, the plastic was torn away and revealed… accompanied by an audible, horrified gasp from the crowd of revelers outside….a gallows….complete with five prisoners, looking like high-plains drifters, each trussed for execution and each begging for their lives in their own pathetic way.
What struck me most was the way the crowd’s mood turned.
Soon,from a mood of initial horror and disgust at the sight of this macabre scaffold, complete with it’s trap doors and armed guard, scattered cries of “Hang ’em..Hang em !” could be heard, until the crowd fairly well demanded that their will be done as judge, jury and executioner.
The more the convicts pleaded for mercy, the more the crowd cried out for satisfaction..
In the end it was less a halloween costume than a display of mob psychology.
Ah, the Green Parrot, your Southernmost Center for Frontier Justice.
As kind of a morbid footnote to this story it should be noted that the Monroe County Court House, located across the street and just feet away from The Parrot, was the site of public hangings as recently as the last century. It is said that the citizenry would crowd second-floor verandas on Whitehead Street to get a better view of the proceedings. “The more things change…”