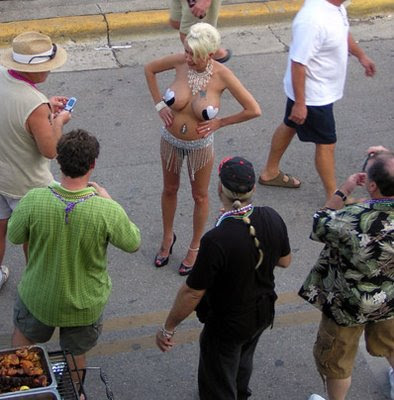 Unfortunately, looking back on Fantasy Fest 2007, this is the image that will endure for many of us…The poster child for most recent Fantasy Fests. I’m not saying that body painting and nudity not two of the seminal components of Fantasty Fest.
Even the first Fantasy Fest, I recall that Sister led the first parade down Duval Street, nude and spray painted gold, splayed out like a hood ornament on the front of some tradesman’s pick-up truck.
But somebody should post a list of all the past Fantasy Fest themes to see
just who’s watch it was on when we gave creativity the heave-ho and opted for the lowest common denominator of titilation enabled by these vague, generic themes, selected by God knows who.