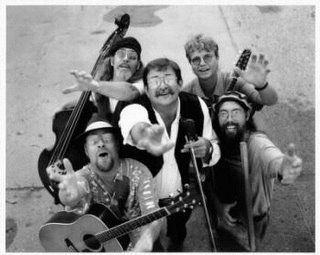 Bluegrass at The Green Parrot
As part of their 31st Anniversary tour, The Piper Road Spring band brings their diverse brand of acoustic bluegrass to the Parrot stage for one night only on Tuesday, February 7th, beginning at 9 PM.
In their three decades performing together they have been nominated by the national Bluegrass Music Industry for the Best Old-Time String band Award and have won the Wisconsin Area Music Industry Award for the Best Bluegrass Artist four times, the latest coming in 1998.
Piper Road Spring Band was born into the age of rock & roll with individual backgrounds diverse as classical, cowboy, folk, blues and Dixieland. Influenced by some live performances of Doc Watson and Bill Monroe and the Nitty Gritty Dirt Band release of “Will The Circle Be Unbroken” in the early 1970’s, they put away the electric amps and guitars and developed a unique acoustic/bluegrass style. The music, although not traditional, incorporates washboard and all the strings found in bluegrass. They never completely abandoned their musical roots and have blended Irish fiddle tunes with American country, big band, novelty and space-aged Grateful Dead inspired jams.
. The current Piper Road Spring Band roster has accumulated over 100 years of experience performing together. The band continues to swing! With their strong bond of friendship, commitment to quality musicianship and continuing support of a strong fan base, Piper Road Spring Band invites you to join them as their show hits the road.
The Green Parrot is your Southernmost Center for Culture of every kind, and is located at the corner of Whitehead and Southard Streets. For additional information call The Green Parrot at 294-6133.