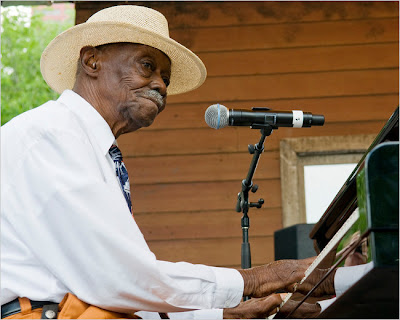 Pinetop Perkins, the boogie-woogie piano player who worked in Muddy Waters’s last great band and was among the last surviving members of the first generation of Delta bluesmen, died on Monday at his home in Austin, Tex. He was 97.
From his days in the groups of Waters and the slide guitarist Robert Nighthawk to the vigorous solo career he fashioned over the last 20 years, Mr. Perkins’s accomplishments were numerous and considerable. His longevity as a performer was remarkable — all the more so considering his fondness for cigarettes and alcohol; by his own account he began smoking at age 9 and didn’t quit drinking until he was 82. Few people working in any popular art form have been as prolific in the ninth and tenth decades of their lives.
A sideman for most of his career, Mr. Perkins did not release an album under his own name until his 75th year. From then until his death he made more than a dozen records on which he was the leader. His 2008 album, “Pinetop Perkins & Friends” (Telarc), included contributions from admirers like B. B. King and Eric Clapton. His last album, released in 2010, was “Joined at the Hip” (Telarc), a collaboration with the harmonica player Willie Big Eyes Smith, which won a Grammy this year as best traditional blues album.

Mr. Perkins’s durability was born of the resilience and self-reliance he developed as a child growing up on a plantation in Honey Island, Miss., in the years leading up to the Great Depression.

“I grew up hard,” he said in a 2008 interview with No Depression, the American roots music magazine. “I picked cotton and plowed with the mule and fixed the cars and played with the guitar and the piano.”

“What I learned I learned on my own,” he continued. “I didn’t have much school. Three years.”

The author Robert Gordon, in his book “Can’t Be Satisfied: The Life and Times of Muddy Waters,” wrote that Mr. Perkins “learned to play in the same school as Muddy — a cotton field, where the conjugation was done with a hoe and the school lunch was a fish sandwich and homemade whiskey.”

Originally a guitarist, Mr. Perkins concentrated exclusively on the piano after an incident, in 1943, in which a dancer at a juke joint attacked him with a knife, severing the tendons in his left arm. The injury left him unable to hold a guitar or manage its fretboard.