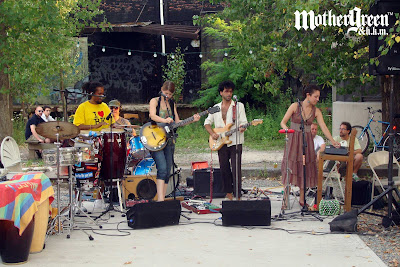 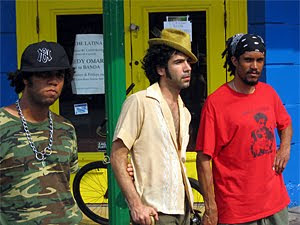 The Pimps of Joytime is a multi-ethnic group that hits all the marks and crosses all the barriers, bridging the gap between underground funk, soul, pop, dance, afrobeat and latin, filling every song with soulful harmonies and great vibes.The Pimps of Joytime’s members come from New Orleans and Brooklyn. That explains a lot: Big Easy “Second Line” meets the streets of New York City.

Brian J is the band’s ringmaster. He started PJT’s in Brooklyn back in 2005, where they cut their teeth while playing clubs in Williamsburg and the East Village. On stage, he’s the lead singer and guitarist, and in the studio, he’s the funkiest one-man-band this side of Minneapolis.
Mixing samples and dance beats with tasty live musicianship and sweet vocal harmonies, The Pimps of Joytime have evolved into the current five-piece that gets crowds on their feet from London to New York to San Francisco. Somehow, PJT’s found a way to put a modern twist on a retro sound, creating dirty, ass-shakin’ grooves like no one else out there.
2008 was a great year for The Pimps of Joytime—they put out two albums on DJ Nickodemus’ Wonderwheel Recordings, “High Steppin” and “Funk Fixes and Remixes”. 2009 is gonna be even better—with a new record on the way and a team in place to bring this band to the masses across the USA and beyond.
The Green Parrot Bar is your Southernmost Center fo Culture of all kinds at
the corner of Whitehead and Southard Streets. For additional
information call The Green Parrot at 294-6133.