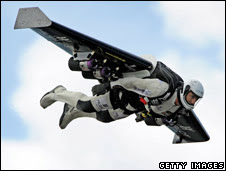 No this isn’t Buco and I concede that this post isn’t bar-related, but this guy is definitly a badass.

A Swiss man has become the first person to fly solo across the English Channel using a single jet-propelled wing.
Yves Rossy landed safely after the 22-mile (35.4 km) flight from Calais to Dover, which had been twice postponed this week because of bad weather.
The former military pilot took less than 10 minutes to complete the crossing and parachute to the ground.
The 49-year-old flew on a plane to more than 8,200ft (2,500m), ignited jets on a wing on his back, and jumped out.
Known as “Fusionman,” he was aiming to follow the route taken by French airman Louis Blériot 99 years ago when he became the first person to fly across the English Channel in a plane.
The wing had no rudder or tail fin, so Mr Rossy had to steer it using his head and back.
As well as a helmet and parachute, he wore a special suit to protect him from the four kerosene-burning turbines mounted just centimetres from him on the wing.

We should show Buco this. Maybe when he’s done with cross county trip….