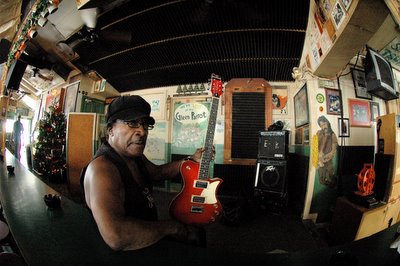 Many may have already seen this post.I thought the picture and subject matter apropos this week’s Photofriday Challenge.

Ah, the life of Eddie Kirkland.
Though his name may not sound as familiar as B.B. King or Robert Johnson, Eddie Kirkland’s life with the blues matches, at the very least, any other blues artist.
He was born in Kingston, Jamaica and raised in Alabama. At the age of twelve, when The Sugar Girls Medicine Show came through his town, he ran away from home by hiding in one of the tent trucks and was soon playing the harmonica in their show and dancing in their chorus line.
By the age of nineteen, he had landed in Detroit and it was there that he began touring and recording with seminal bluesman John Lee Hooker. “We were like brothers”, Kirkland said. The two made a solid team until parting ways in the 60’s.
Kirkland then moved to Macon, Georgia where he began a three-year stint as bandleader for perhaps the greatest soul man ever, Otis Redding.
Continuous road tours followed with Ruth Brown, Little Richard, Ben King and Little Johnnie Taylor and many more greats.
Then Eddie recorded what is considered by many to be one of the most powerful records in blues history: “It’s The Blues, Man” with The King Curtis Band.
At age 84, respected as one of the very best soul blues and soul artists ever, Kirkland continues to tour 42 weeks per year earning him the title “Gypsy of the Blues”.