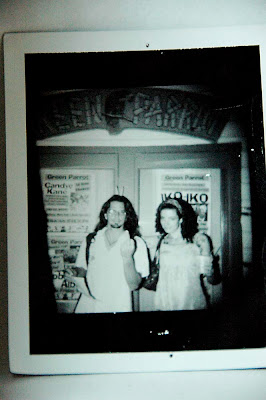 This week’s Photo Friday Challenge was Found Objects.
The Green Parrot submission, # 367, is a found photo from some months ago. This polaroid appeared one morning, pinned alongside my band posters, on the street outside the bar, inside the plexiglass doors of our entertainment marquee,
which conveniently doubled as the backdrop for this dudes inauspicious salute, (Flickr this), as his ersatz Mallory looks on.
I must say it’s a welome change from the usual toad-licker who stands outside the window and flips us off. At least this guy had the energy and creativity to record it and leave it.