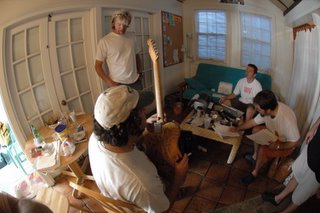 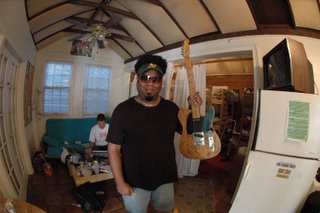 Here’s the scene in the Green Parrot bandhouse as the boys from New orleans get ready to head up US 1 for their show at the Bamboo Room in Lake Worth.
Guitarist Bert Cotton prepares to sign the Parrot’s vintage telecaster, as many other road warriors have before him.
Fueled by cuban coffee from the deli across the street, Bonerama founders Craig Klein and Mark Mullins, along with Sousaphonist Matt Perrine show their high tech edge as they print out charts from their laptop for their next show. I don’t know when we’ve had a band that had as much fun themselves and yet behind the scenes they’re a fine tuned machine.
Pictured below, drummer Eric Bolivar displays the aforementioned Telecaster that’s destined to hang on the wall in the bar.