For the last several months I’ve been tracking, by way of their blog, notthemotorcyclediaries.com, the travels of a pair of Key West brothers, Josh and Ian Rowan, as they travel by motorcycle through Central and South America. 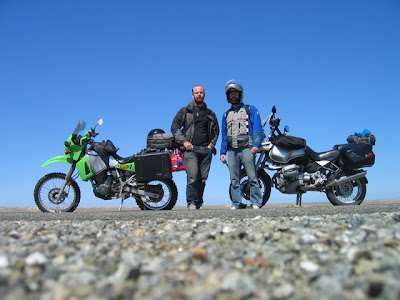 The idea of this venture is to, more or less, retrace the route of an earlier trip they made, an odyssey really, a sailing voyage that began with they boys’ parents building a sailboat by hand in the mountains of Oregon, sailing through the tropics with the boys and their two brothers, toddlers all, and landing in Key West some seven years later.
I would urge anyone to check their blog out. it is, besides being informative and articulate, always entertaining and sometimes hilarious.
In addition to some great travelogue-like photos of the geography they pass through, some Google Eath maps, or an occassional youtube video thrown in (one video showed one of the brothers having stiches applied to his leg in a Guadalahara emergency room after a nasty crash on his bike, another was I believe a video tour of the inner harbor of La Paz, Cabo San Lucas, complete with quarts of beer being passed around the dinghy). Their posts sometimes digress to highlight people they meet on the way which leads me to today’s Green Parrot post. It seems their latest encounter has been with three young men sailing around the world who have an interesting story and a clever proposition

Here’s the three guys with the proposition 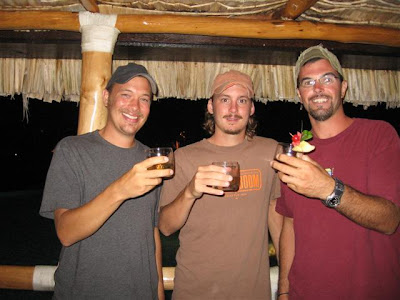 Although, as the boys clearly acknowledge, and we agree, that there are certainly more deserving recipients for donations I felt that since we are in the business of doling out drinks we could indulge them. The question is, what do we buy them? Personally I’d like to see them hoist a round of whatever the local firewater is wherever they happen to be at the moment. Perhaps a few shots of overproof rum or some high-octane cane liquor that’s distilled out in the fields and filtered through an old sock before being distributed in used red plastic gas cans, but hey, that’s just me. Let me know what your ideas are and we’ll try it. I wonder if they can get a root beer barrel down there?