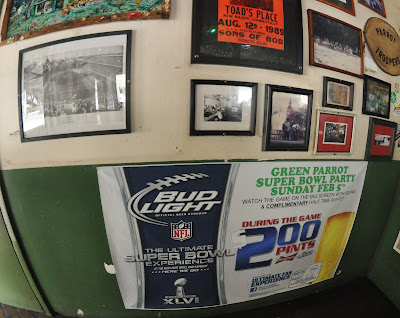 Shown in this photo taken in the Parrot this morning, to the upper left of the Budweiser poster announcing this years Super Bowl, is a vintage photo taken game day, December 26th, 1960 at Franklin Field.
Below is the the photo, showing none of the carnival atmosphere present at today’s championship games. Note in particular the near-empty sidelines. 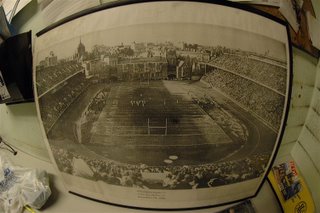 In the same vein, to see how quaintly quirky this 1960 Championship game seems now, here’s a quote from a recent New York Times article about the game:

“…..Kickoff was moved from Sunday to Monday at noon, given the belief — now quaint in the era of ubiquitous television — that Christmas should be a day for devotion and family, not sports.

Snow ringed the field after a frigid week. The crowd reached capacity at 67,325 as portable bleachers seating 7,000 were installed around the stadium track. Still, a local television blackout was enforced, sending many Eagles fans driving to New Jersey or Baltimore to watch the game.” 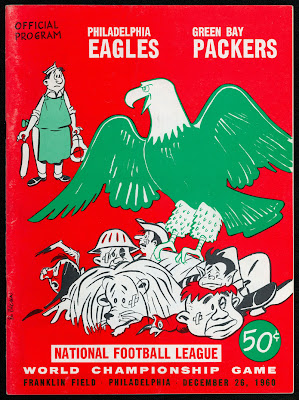 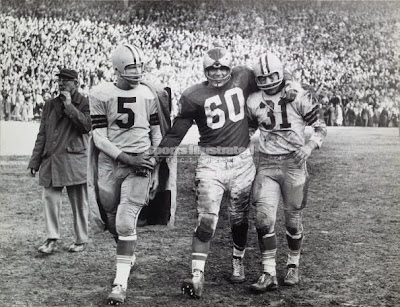 Philadelphia’s Chuck Bednarik, center, with Green Bay’s Paul Hornung, left, and Jim Taylor after the Eagles’ 17-13 victory over the Packers in the N.F.L. championship game on Dec. 26, 1960, at Franklin Field.

Even with the presence on both sides of the line, of legends and Hall-of-Famers like Vince Lombardi, Norm Van Brocklin, Tommy McDonald, Jerry Kramer, Max McGee, Ray Nitschke,

Paul Hornung, Jim Taylor, Tom Brookshier and so many others, it was the play of Eagles center and middle linebacker Chuck Bednarik that makes this game one that is still talked about in Philadelphia barrooms.
In 1960 injuries forced the Eagles to ask Chuck Bednarik, their 12-year veteran to again play both sides of the line. He finished the campaign with a 58-minute performance, capped by a game-saving tackle in the Eagles’ NFL championship victory over Green Bay.
With just seconds remaining, the Packers’ Jim Taylor appeared to be heading for a winning touchdown. At 35, Bednarik was the oldest player on the field. But even after playing 58½ minutes, playing on both offensive and defensive platoons for every scrimmage play. and leaving the frozen field only for his team’s kickoffs, Bednarik still had enough left to get to Taylor.
Bednarik met Taylor at the nine-yard line, and in the words of sportswriter Bill Lyon, “wrestled him to the cold, hard ground like a rodeo cowboy bulldogs a steer and then sat on the squirming, seething Taylor until the clock blinked down to all zeroes.”

Bednarik punctuated the moment with a verbal exclamation point, telling Taylor, “You can get up now, Taylor, This fucking game’s over.”. 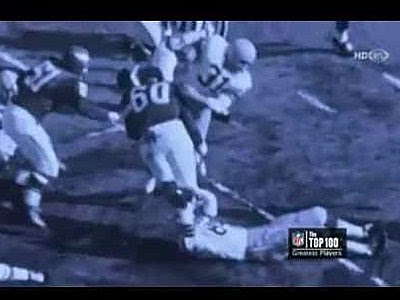 Bednarik tackles Taylor at the eight-yard line to end the game. 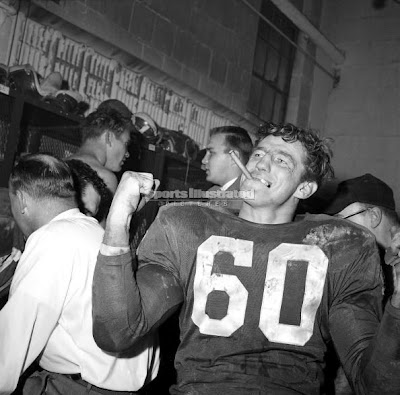 Bednarik celebrates in the Eagles locker room after the game.
Bednarik was nick-named “Concrete Charlie” not because of his physique, but because he sold concrete in the off-season. Years after this game, Bednarik picked me up hitchhiking and took me from Avalon, New Jersey to the Ben Franklin Bridge, a few hours I won’t forget. 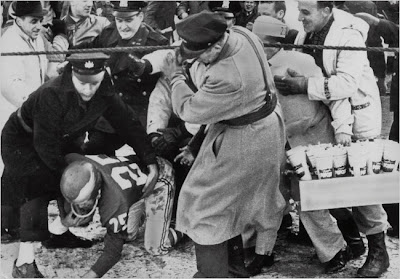 Police officers helped up the Eagles’ Tommy McDonald after he scored in the 1960 game.
Both wide receiver Tommy MacDonald 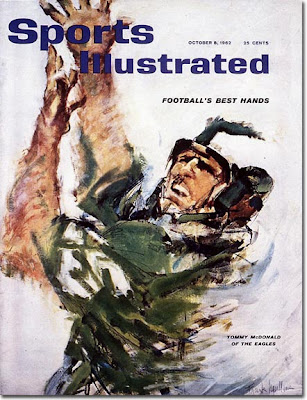 and quarterback Norm Van Brocklin made SI cover but avoided the jinx. 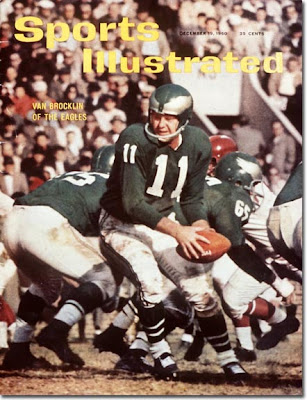