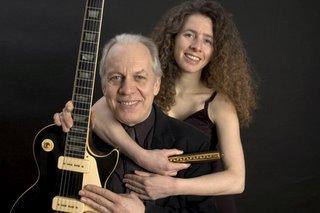 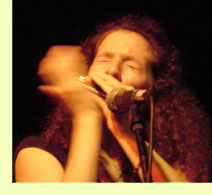 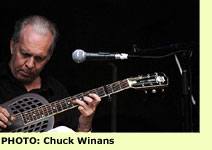 Acoustic blues revivalists Paul Rishell and Annie Raines will appear at the Green Parrot Bar for one night only on Wednesday, February 1st beginning at 9 PM.
Known for their close attention to prewar acoustic blues styles, W. C Handy award winners Paul and Annie Paul form an explosive blues combination that covers vast blues territory. Covering songs from the pre-war delta sounds of Charlie Patton to West Side Chicago’s Magic Sam without losing coherence or their own identity, showing what a good guitar/harmonica partnership can sound like.
Annie Raines is considered the best female blues harmonica player….ever. And Paul Rishell is unparalleled in his intensity, soulfulness, and spine-tingling improvisations.
With both feet firmly in tradition and an encyclopedic knowledge of the great players and their recordings they cover tunes from the great blues artists from the thirties to the sixties, from such frequently covered tunes as Big Bill Broonzy’s “Key to the Highway” to lesser known ones by Barbeque Bob and Peg Leg Howell.
Paul has played with many of his heroes, including Son House, Bonnie Raitt, Chris Smither and Howlin’ Wolf. Annie, as one of the first serious female blues harmonica players in the country has played with Pinetop Perkins, Louis Meyers and James Cotton.
Paul and Annie both base their ensemble playing close communication, listening keenly to support each other, and their duo work is marked by this sensitive interplay that has become so central to their performances.
This will be an unforgettable evening of great compositions and moving songs. You’ve heard them on lots of soundtracks and as regulars on A Prairie Home Companion. Don’t miss a chance to hear them live.
The Green Parrot Bar is Your Southernmost center for Blues Culture, located on the corner of Southard and Whitehead Streets. For more information call 294-6133.