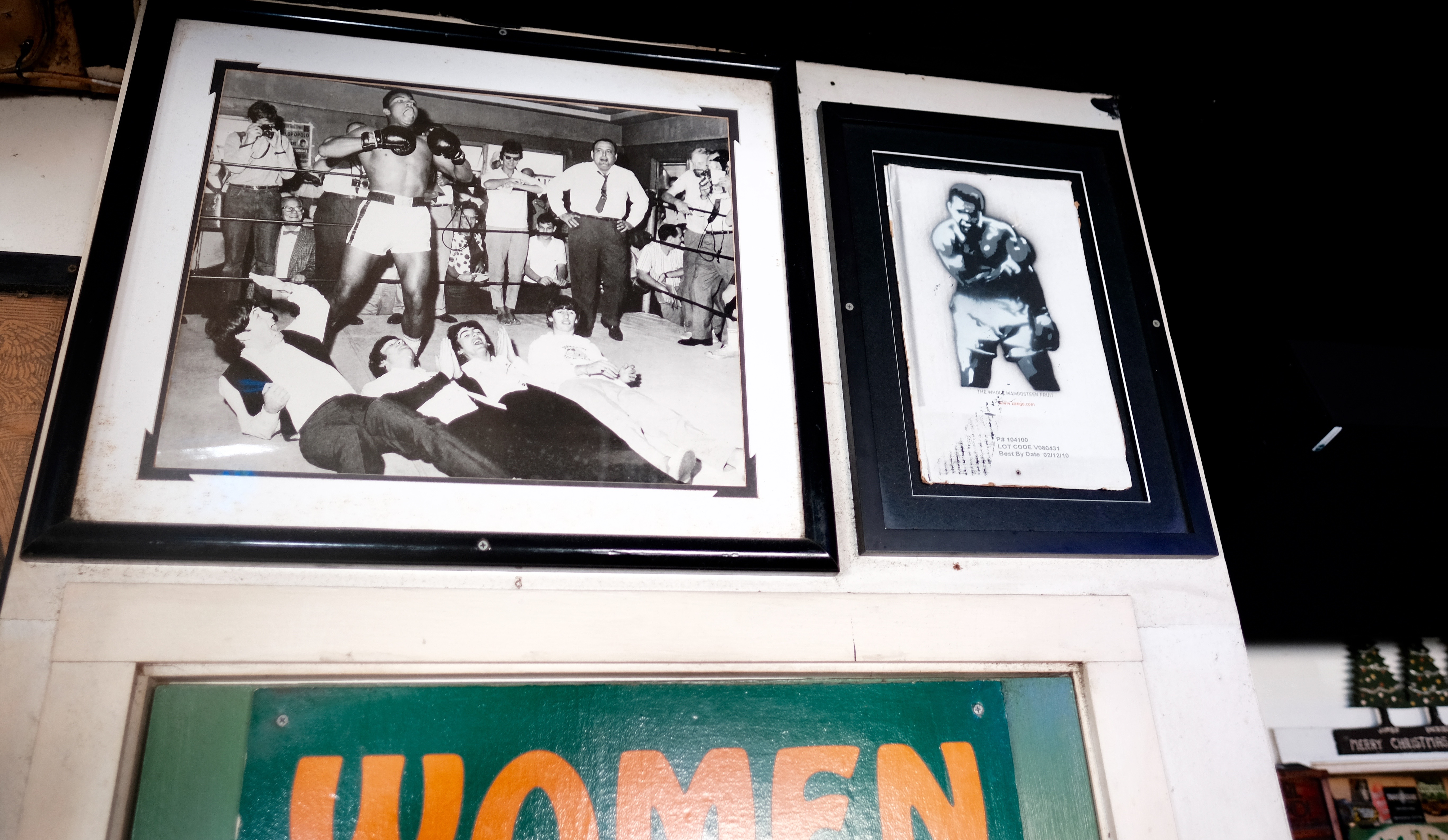 Two of my favorite pieces on the walls here at The Parrot are images of Ali.
The photo on the left, taken by Beatles photographer Harry Benson, (which I found in a pile of old photos in a junk store and bought for two dollars I believe) shows Ali, then still known as Cassius Clay, in February of 1964, at the 5th Street Gym on Miami Beach mugging, as only he could, with The Beatles, seen cowering on the canvas below him with Paul feigning terror, while John and George seemingly pray for deliverence.
The Beatles were on their first visit to America, having done Ed Sullivan the week before, and Ali was in Florida training with Angelo Dundee for his upcoming bout with then-Heavyweight Champion Sonny Liston.

And on the right, a stencil done by my son Dan, is a detail from a Photographer Neil Leifer’s iconic photo, taken at Ali’s 1st title defense as World Heavyweight champion on May 25, 1965.
That photo is, I believe, the most famous photo of Ali, and has been called by some the most famous sports photograph the 20th century.

In the complete Leifer image, shows Muhammad Ali, no longer Cassius Clay, at the peak of his powers, towering not over The Beatles, but over the crumpled body of Sonny Liston, tauntingly imploring the challenger to get to his feet.

Let’s fast-forward to twenty years or so after either of those photos were taken, I’ll say 1983.
I’m standing on the curb on Whitehead Street, on our corner in front of the bar, holding in my arms, my other son Nick, who was about 2 years old at the time.

As the pair of us wait patiently for the light to change, a black limousine pulls up directly in front of us, the tinted glass of the back window glides down, and, suddenly we-two are less than a foot away from what is arguably the most recognizable face in the world: Mohammed Ali.

Ali stares, not at me, but directly at Nick, and cocking his head slightly towards his upraised left fist and, while remaining completely deadpan, jabs repeatedly with his right index finger at the now-swaying, menacing, clenched left fist.

The light changes, and, as suddenly as he appeared, without anyone of us uttering a word, the limo pulls away, but not before Ali gives us both a nod, and a wisp of a smile, a smile so sweet I’ll never forget it.

I love these images for quite personal reasons, because they remind me of both my kids, and because of what Ali represented to so many, the world over, on so many levels: as an athlete, as a black man, as an American, and as a human being.